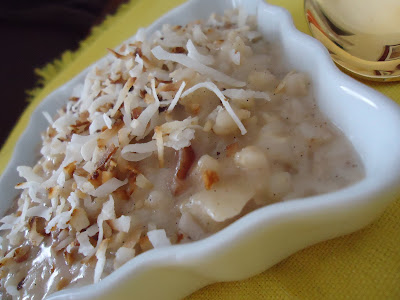 Rice pudding is one of those comfort foods that we assume has been around forever. But before the 20th Century barley was the King of Grains and impoverished Scandinavians likely only knew about rice if they worked for wealthy families who could afford it. Maybe it is part of my DNA, but I've always been fond of barley. Rice is fine with occasional take-out from our local chow mein joint, but I prefer a grain with more substance.

I've posted a recipes for coconut rice pudding balls (inspired by a visit long ago to Aquavit Minneapolis) and the first version of barley pudding (that I developed for a Swedish cooking class). The barley-coconut pudding I created for this week's Called to the Table is a tasty hybrid of the two. Using coconut milk naturally sweetens the pudding so only a few tablespoons of sugar are added to the entire recipes, and barley is a healthy whole grain. Healthy enough for a snack or breakfast, barley pudding isn't just for Christmas anymore!
Email Post
Labels: appetizers breakfast dessert holidays immigration snacks Swedishness

Mrs. L said…
I've never been a rice pudding fan which is strange because I'm a fan of Champorado aka Chocolate Rice, a Filipino dish. I may have to give rice pudding another taste (it's been since childhood that I've had it).
January 17, 2013 at 12:17 PM