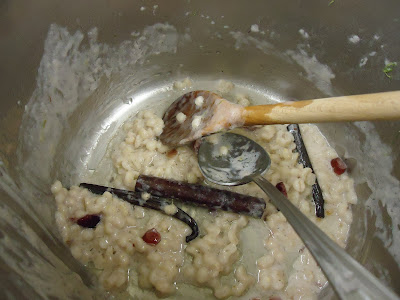 Barley pudding is rice pudding's very hip grandmother.  Rice was not widely available to impoverished Swedes until the late nineteenth century.  Barley pudding was typical fare on Christmas and for other important celebrations.  As rice became popular among lower classes, it replaced barley.

Rice pudding lore includes a prophetic feature.  A variety of items are baked into the dish.  Bite into an almond and you are to be married, but bite into a butter almond and you'll become a spinster.  Bite into a brown bean and marry a widower or widow. Discover a silver coin and expect wealth (hopefully you won't lose a tooth in the bargain!).  Modern Swedes set a bowl of rice pudding outside on Christmas Eve for the tomte as thanks for his protection of the house and family.  An empty bowl in on Christmas morning predicts peace and prosperity for the coming year.

In an effort to reclaim the wonder-grain barley, I prepared it using the same ingredients that I put in my Coconut Rice Pudding Balls.  We prepared the barley pudding in my Swedish foodways class, and the students ate it so quickly that I didn't have time to snap a photo until the pot was nearly empty.  In this recipe, the barley plumps rich and velvety from thick, creamy coconut milk.  An accent of lime brightens the vanilla and cinnamon, and Craisins replace the raisins (as they do in most of my recipes).

3.  Remove cover during final 10 minutes of cook time and add half and half or pineapple juice if pudding becomes dry.  Garnish with lime zest, toasted grated coconut, and nutmeg.