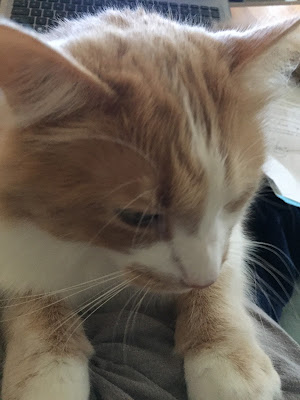 Neither of our cats are my lapcats. To be clear, Orson is Ted's lapcat, and Oskar sleeps on my head at night. I know that they love me, but their physical affection toward me is limited at best. Ever since our Olive passed away, my lap has been empty.

Cats have a keen sense of emotion in others. They witnessed my sadness and anger Tuesday night as the polls came in. They saw me struggle Wednesday morning, crying and trying to breathe in, breathe out. Then they tag-teamed laying in my lap the entire day, taking turns crawling over my laptop to get closer to my chest, purring and kneading me with sharp nails that I've been meaning to clip for a few weeks.

I've been thinking so much about my Aunt Hazel. She lived her entire life, 94 years, waiting to see a woman become president. Imagine being born in a country before women had the right to vote, then watching and participating in the changes that made it possible for women to vote, to run for office, to run for president. Aunt Hazel was devastated when Barack Obama beat out Hillary Rodham Clinton for the Democratic ticket in 2008. I was beyond happy that a brilliant, eloquent man (and yes, black!) was running for office, and elated when he won (My god how I will miss him when he leaves office. What a refreshing counterpoint to those terrifying bumbling inept Bush years.). Yet, Aunt Hazel pointed out then what I've have been grappling with this past year about how our country, how our world, views women.

Tuesday I brought Aunt Hazel's spirit with me to vote. I was really bummed that the celebration we should have been feeling for this amazing historic moment was squashed by the ugly. Even my fellow liberals began conversations with, "I hate Hillary, but..." Here is my truth: I admire Hillary Rodham Clinton and I have no idea why she gave so much of herself to such an ungrateful audience. As I marked the rectangle next to Hillary's name I felt hope, pride, and my Aunt Hazel smiling over my shoulder.

The backlash, or blacklash as some pundits refer to it, is exhausting. From Bill Cosby to campus rapes, from white supremacists to antichoicers, from unarmed black men shot by police to ... oh I am too tired to list the insults and untried crimes we've dealt with, and sadly will continue to deal with. The very worst of frat boy mentality reveals itself. More often than not, the rich white men who rape and grope are rewarded, and it isn't just women who will have to fight off the smirking bigots.

As I sit on my couch, trying to write, my heart too broken for words, another cat climbs into my lap and purrs and does his best to comfort me. I hope all of you have a cat or a dog or a friend or family to remind you of the good in the world. Soon enough we will need to dry our tears and start, again, the good fight. When I was younger my mom always gave this advice when I was sad: cry for ten minutes a day, then move on and do something constructive. I will take her advice because I refuse to roll over, and I refuse to allow cruelty and bigotry to be the accepted standard in my country. 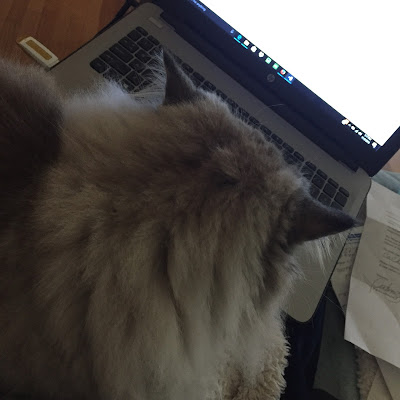