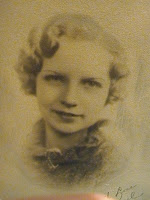 ﻿
Until recently I didn’t know my Aunt Hazel well. Most of my beliefs about her were based on our family’s repeated description, “Aunt Hazel is the fun one.” She was my Grandpa Al’s little sister, and the last living sibling in their very close family. She had a habit of shocking her more prudent siblings with her social activities. I well recall hearing disapproving murmurs and tsktsks when it was learned that a limousine pulled up to Aunt Hazel’s house for her birthday one year. And when she took a cruise. And when she gambled. And when she served cocktails to her friends.

Whether or not Aunt Hazel knew about the displeasure her siblings took in these activities, she never let on, let alone cared. As she told me once, “I just don’t take things too seriously.”

I started seeing Aunt Hazel regularly a few years ago. She’d greet me at the door with a hug and a kiss, always smiling and beautiful, always perfectly made-up. Over endless pots of coffee she told me her stories.

There was, of course, the love story. Aunt Hazel and Aunt Millie were walking home from a movie one evening. They strolled down East Hennepin, Aunt Hazel wearing a polka-dot dress that Aunt Millie had sewn. A car drove by, slowed down, and a handsome man poked his head out of the window. He asked, “You girls need a lift?” Shy Aunt Millie sat in the back between Elmer’s two buddies, and vivacious Aunt Hazel sat up front with Elmer. Uncle Elmer often reminiscenced that he fell in love with the girl in the polka-dotted dress. And what a love it was! 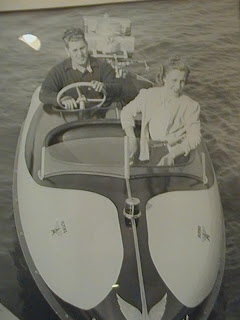 Their first date was to Red Wing, where they hiked across Barn Bluff. I think Uncle Elmer was testing Aunt Hazel, to see if she was as adventurous as him. She was! Throughout their courtship and marriage they enjoyed daring activities. They owned a small speed boat, took hikes, explored new places; always together. They spent Sundays driving along the river into Wisconsin, searching for hidden treasures. Uncle Elmer liked to stop for lunch at diners with no cars out front. He’d tell the proprietor, “You’d have more business if you parked some cars out front and made it look like you were really busy.”

Hazel and Elmer never had children, and their thirty-plus years together were intense and intimate.  And those of you who visited their house know in every room there was a photo of Elmer facing the chair or couch or bed where Hazel would most often perch.  (My favorite is the large framed print of the two of them in their little boat.  They are fresh and vibrant; like an advertisement for happiness.)  Thirty years after Elmer's death and they remained inseparable. “I eat every meal with him, watch television with him, and see his face before I sleep and when I wake up,” she explained. She told me that he wrote her love letters during The War. Brazenly I asked if I could read them. “No,” she answered with a snort. Those must be some letters.

She couldn’t stand being cooped up. Living in a space with no windows brought on panic and claustrophobia. In fact, as children she and Aunt Millie shared a sleeping bed with their mother, and Aunt Hazel curled up at the foot of the bed to be near the bedroom window.

The house where Hazel and Elmer lived for many years together, and too many years apart, is open and sunny, with wide windows that run along both the front and back of the house. From the kitchen Aunt Hazel watched over her neighborhood like a protective mother. From the living room she had a view of the hills along the cemetery where most of her loved ones were buried. The house is positioned on a huge corner lot, which made it susceptible to theft. Three times she was robbed. Once, she chased the robber down the sidewalk until he was out of sight. She was fearless.

A lifelong liberal, Aunt Hazel was excited at the possibility of a female president. When Hillary Clinton didn’t nab the Democratic endorsement during the last presidential election, Aunt Hazel pouted and refused to vote. She was used to getting her way, and I would hate to be the person who ever tried to tell her “No.” Taking a cue from Uncle Elmer, we all learned to spoil her as best as we could.

She didn’t like strawberries, didn’t much care for chocolate. She liked lobster and chow mein. And when I asked her what I could bring for lunch to celebrate an early Christmas together she told me, “I like those McDonalds hamburgers.” It became our annual holiday tradition for me to pick up burgers and fries at the drive-through on my way to her place. That first year it was just the two of us. She set the table with her beautiful Christmas finest, complete with holiday stemware. As I settled in, Aunt Hazel clasped her hands together and asked, “Would you like a glass of wine?” That year I learned that chilled Chablis from a jug pairs perfectly with McDonalds Quarter-pounders.

It wasn’t always easy to make a date with Aunt Hazel. Her schedule booked up weeks in advance. I’d call to set something up and I’d hear her flipping through her day planner. She lived just a week and a half past her 94th birthday. Those 94 years were packed with examples of a life well lived: love, joyfulness, adventure, friendships, and family.  I am grateful that Aunt Hazel shared her last few years with me, and that I got to learn firsthand exactly what made Aunt Hazel “the fun one.” 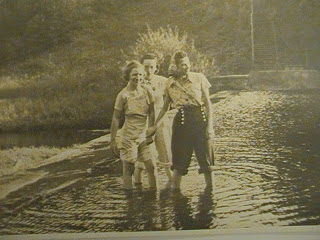 stephaniesays said…
this was very sweet...she was an awesome lady and I wish I'd gotten to know her better but I think it's great that you spent so much time with her these last few years and I think we could all tell it meant a lot to her AND you!
September 30, 2010 at 7:15 PM

patrice said…
Thanks stephaniesays. We'll skål to her at Jul with McDonalds and chilled Chablis.
October 1, 2010 at 7:15 AM