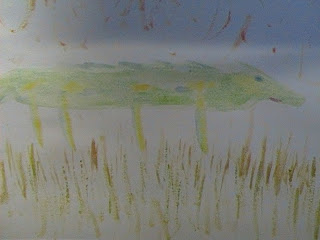 Before there was Lila or Shelly, Lorelei or Tiffany, before there was (insert your name here if you are one of my best friends who doesn't frequent this site), there was Macaroni. Later, Alligator joined us.  Macaroni and Alligator were friends of mine that lived in the fields, behind our house on Main Street, on the edge of our little town far into the corn and soybeans that grew between Gaylord and Arlington.

They spent their days with me while my older sisters were at school. I read to them for hours under the apple tree in our front yard. We rode our horses up and down the sidewalk. We visited the aged and decrepit German Shepherd Frieda who guarded the washing machine store on the corner. My mom set a place for Macaroni so that I wouldn't have to eat lunch alone. My grandpa let Macaroni have turns when we played games. And our dogs barked at Alligator so it never came into the house.

I hadn't thought much about them until I had a class a few years back. My instructor asked why I ever began neglecting these "imaginary" friends. He suggested that these beings might still have something to teach me.

I reconnected with my nearly forgotten creativity and imagination and came out of that class with some awesome stuff, including the setting and completion of five goals. One of the goals was to enter the Pillsbury Bake Off that year. This was not easy, considering I do not use their refrigerator dough products or processed foods in general, but I think I came up with some pretty decent ideas. In honor of this year's winners, here is one of my favorite submissions.

Bake at 400 degrees F. for 7 to 9 minutes or until cheese is melted and crust is very light golden brown.

Evenly spoon vegetable and mixtures over warm pizza crust. Sprinkle with the feta and parmesan cheeses.

Return to oven and bake additional 10-15 minutes or until cheese is melted and crust is golden brown.