I. H. V. Monday: Convenience or Just Say No? 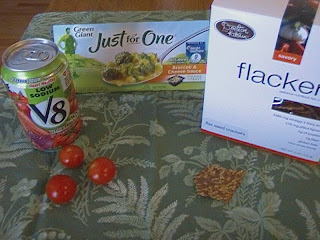 Which would you eat?
In my quest for edible veggies I reached into the convenience aisle and found some hits and misses.
First, I understand that flax seed isn't technically a vegetable but this cracker was so awful I feel it only fair to warn you and this space is as good as any.  I spent the cost of a matinee movie ticket on these new flax crackers called "flackers."  I should have known by the gimmicky name that this was a bad idea.  It was a late night getting home and I needed a small bite to tide me over until dinner, so I opened the box in the car while Ted ran one last errand.  The aroma of a butcher shop filled our car, and in fact still resides there a week later (every moment of my life parallels a Seinfeld episode).  How can a vegetarian cracker stink of rotting sausage?
Second, lured by Lorelei's recommendation and the thought of having two servings of vegetables in one can, I tried the Low Sodium V-8.  This might be drinkable if vodka was added, as well as Clamato, celery salt, hot sauce, horseradish, and Worcestershire.  But I think they might frown on that at work.

Finally, Green Giant came out with their "Just for one" frozen, microwaveable treats.  This snack proved to be a wonderful way to sneak in low calorie, low carb, and not bad tasting vegetable servings into a work day.  At around $3 they are pricey, but come four in a container.  So far I've only tried the broccoli and cheese, but I'll keep you apprised of any further experimentation.
Email Post