Of Valentine's and cats 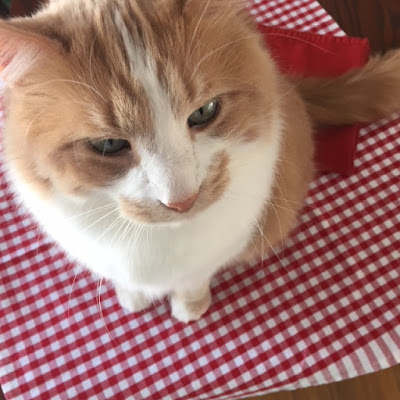 In our house there is a clear distinction about which human belongs to which cat. I am very much Oskar's human. While he loves playing with T, and enjoys attention from just about everyone, when it comes to love and affection Oskar comes to me. At night he sleeps on my head, or at the very least shares my pillow.

Orson on the other hand, is unapologetically in love with T. Orson tolerates my presence, but rarely sits with me on the couch. He prefers nestling his head in T's lap while staring lovingly into T's eyes. At night Orson uses T's body as leverage while he tries to push me out of bed with his strong legs. There have been nights in the past year when I wake up in the middle of the night to find Orson laying between T and me, but more often I open my eyes to see Orson's enormous face about two inches from mine, his blue eyes boring through my soul, like he is watching and waiting...

Then last night a miracle happened! I was nudged awake as Orson attempted to get comfortable. I felt him tugging at my pillow, then a soft heavy blow hit my face and ear as Orson plopped down on my head and immediately started purring.

T says Orson is one pound over a regulation bowling ball. At 17 pounds he is a big big boy, and 17 pounds of soft fur is still 17 pounds. With that girth pressed against my ear I could hear nothing but the purrs. Orson's flicking tail tickled, and I soon lost feeling in my face and neck, but I was in heaven. I felt like Sally Field accepting the Oscar, "You like me! You really like me!"

It wasn't until I felt T lift Orson up and out of bed that I realized Orson had only been using me to get closer to T. He wasn't snuggling with my face out of love. I was simply a prop in his efforts to lick T's ear.

For a moment I believed that Orson might be my Valentine this year. Alas, it wasn't meant to be. It shouldn't shock me anymore that Orson only has eyes and love for T. We have that in common. 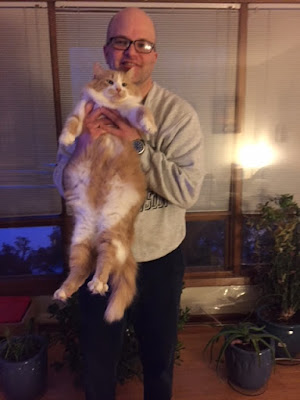