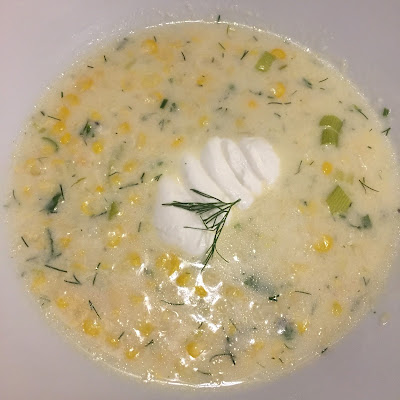 It is only mid-August and I am already corned-out. I know, only a spoiled Minnesotan can be tired of corn, fresh from field to table. But it felt like corn came early this year, although a farmer reassured me things are right on time. Everything felt early this year, maybe because I have this sense of things being rushed. Like when Back to School sales begin on the 4th of July. Everyone seems in such a hurry to replace the current season with the next one.

A friend of mine moved to Seattle just before the first harvested Minnesota corn made it to our markets. She loves the west coast goodies (fresh salmon!) but laments the lack of fresh sweet corn. Her experience sent me into a panic and I wondered what life would be like if sweet corn weren't available for that precious month of late summer. That panic resulted in me bringing fresh corn into the house every chance I had.

We've enjoyed corn salsa, corn tacos, corn salad, boiled corn, grilled corn, corn with butter and corn with cheese, corn on the cob and corn off the cob, corn pudding, corn bread, corn muffins, corned potato salad and corned mashed potatoes, hush puppies, and corn chowder with cheddar and dill. Did I mention I am corned out? Well, except for the hush puppies. Nothing beats deep fried corny nuggets.

My friend who now lives in Seattle will return to Minnesota in a few weeks to celebrate the Minnesota State Fair with me. She's already put in a request for several visits to the Corn Roast. The Corn Roast is a popular State Fair vendor. You stand in a line to purchase a ticket for corn and/or pop, then stand in line to receive the butter-dipped corn and/or pop, and then stand in the street eating your hot roasted butter-dipped corn on the cob with a thousand other corn loving souls willing to pay a few bucks for the pleasure. Then you stand in line to toss your spent cob into the compost bin, all the while hoping someone in your group has a spare string of tooth floss they are willing to give you. (If you stay until the Fair closes for the day, you will be treated to a song and dance performance by the Corn Roast workers.)

While my friend eats her roasted corn, I will wander over to the neighboring vendor where they sell alligator meat and frozen grapes, and I'll order a batch or two of hush puppies that I might share. Or not.

Summer is fleeting. Enjoy it while you can.
Email Post
Labels: MN State Fair soup