Who says you can't go back? Zima 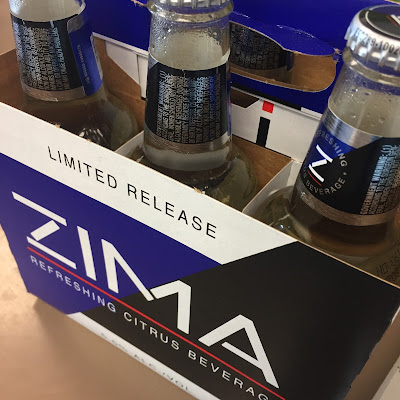 In the nineties I wore so much khaki that I was once mistaken for a clerk at the Boy Scouts store in our local strip mall. I watched Friends and Seinfeld religiously, I biked everywhere, and existed on a steady diet of Cheetos and cheap beer with intermittent nibbles from my young daughter's Kid Cuisine TV dinner. (I didn't worry about my weight because I didn't have to. Yet.) Mom jeans, bib overalls, and sun dresses over white t-shirts paired smartly with banana clips and chunky heels. Things were pretty good, but I never thought I'd feel nostalgia for those years. I'm an 80's girl, after all.

The 90s represented my first breath of freedom. Technically an adult, but not really mature enough to recognize that status, I ran through the decade with breathless abandon. My friends and I spent summer evenings together, toasting to our lives with cold Zimas pulled from a cooler of melting ice, just like in the commercials. Zima was a joke to some, and life's very essence to the rest of us.

As quietly as banana clips and mom jeans disappeared, so too did our favorite malt beverage. I don't recall being warned that Zima was leaving the liquor store shelves and our summer nights. Was there was an announcement we ignored? The 90s ended as Florida ominously forecasted the decade to come, and just like that our carefree days ended. I waved a sad goodbye to Al Gore and my innocence.

Last year when Gilmore Girls released the 4-part mini revival, a renewed interest in Zima spread among Gen-Xers (we who partook of the cocktail back in the 90s) and Millennials (those who were too young to enjoy the refreshing beverage during its heyday).


Obligatory Gilmore Girls-Zima reference explanation: Zima played a significant role in the TV drama, as Luke and Lorelei enjoyed a few bottles of warm and aged "chick beer" to toast their engagement.

We knew Zima was still sold in Japan, and we searched the Internet for viable recipes to make our own. But without the original, how could we know if what we were drinking was legit?

Around us the world was falling apart. There was little comfort outside of binge watching the aforementioned Gilmore Girls reboot and Friends reruns. Then it happened: rumors about the rerelease of our beloved Zima had some of us questioning this as possibile fake news. Yet, on the 4th of July I wandered into our neighborhood mom and pop wine shop, and there on the front wall was a shrine built of cases and cases of fresh Zima.

It was like being confronted with myself at 27. Remember me? Remember the hope you had? Remember tanning and not worrying about sun damage? I tucked a 6-pack under my arm and gladly paid a hefty $10 to relive those years.

T and popped the caps off a couple of chilled bottles and we were transported to the past. Zima tastes like youth. It tastes of unidentifiable sweet (but not cloying) citrus, grounded with a tickle of pink bubble gum. Its effervescence is refreshing, like a bike ride with the wind at your back. It is the love child of My Pretty Pony and Hilary Clinton's headbands.

I've become a Zima hoarder. Soon after the 4th the stores in our city were selling out. I bought out the remaining stash at our neighbor store, where the owner assured me they will stock the limited release Zima as long as the supply line continues. On these hot humid days when the news tells us that the craziness of politics continues, I reach for a cold Zima and reflect. I wonder if my old bib overalls still fit.

Zima
http://www.zima.com
Various locations across the United States for a limited time only.
Price: $6 to $10 for a 6-pack.