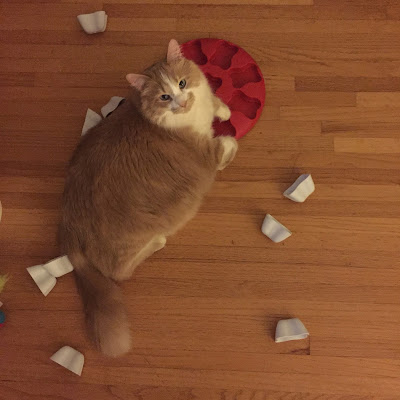 Last year at his annual exam, Orson received rave reviews for his slender waist and feline-proportioned features. This year, we all received a gentle scolding. Obsessed as he is with food and eating, Orson begged his way into a slight weight gain and now faces another round of food deprivation as prescribed by our stern vet.

Orson is a determined guy. He's gotten into the habit of forcefully, violently waking T several times each night demanding a second dinner, early breakfast, second breakfast, etc. Orson can be very persuasive, and nothing we do soothes his nighttime appeals. He wails and whines, he jumps up and down on T, he bites T's ears or plays with the string on his pajamas. He uses T's body as leverage and pushes me with his sturdy legs (and I wake up just about to fall to the floor). Eventually, Orson bullies his way into second dinner, early breakfast, second breakfast, etc.

When we shut the bedroom door Orson throws his body against it. If you've ever thrown a 17 pound bowling ball against a wooden door, you know the sound it makes. THUMP. THUMP. When he tires of that he stands on his back legs and jiggles the door handle with his front paws. WIGGLE WIGGLE JIGGLE. But Orson's favorite way to get back into our bedroom is to slide his paw underneath the door and "boing" the door stopper. Over and over and over and over again. A strong cat can get quite a sound to emit from the stopper.

We've created all sorts of deterrents, stuffing rugs and papers and shoes under the door. Sometimes our inventiveness works and we spend a blissful few nights without being harassed. More often than not Orson figures out a way around the obstacle and the thumping and jiggling and boinging begin again. And again. And again.

As a result of his persistence and our need for sleep, Orson gained a pound this year. We aren't exactly back at the drawing board, but we are looking for ways to ease Orson's hunger and our sleeplessness.
Email Post
Labels: cat blogging