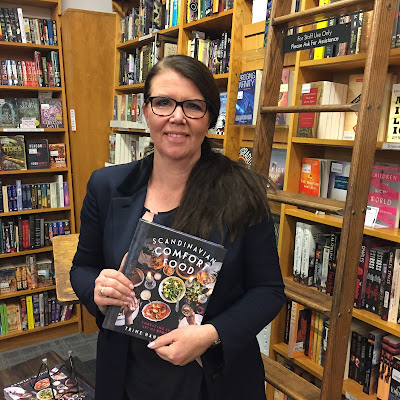 A friend contacted me through social media, asking if I planned to attend a book signing with Chef and cookbook author Trine Hahnemann. Attend?! I hadn't even heard about it. Seems that was the common reaction last week when we Scandinavian food lovers learned that Chef Trine made a quick stop in Minneapolis to promote her latest cookbook, "Scandinavian Comfort Food."

I've got all but one of Hahnemann's books on my shelf, and gleefully headed to Uptown on Monday where she was speaking and signing at Magers & Quinn Booksellers. Five of us (did I mention no one knew she was coming to town?) sat in the stacks and lapped up every word as Hahnemann generously spoke to us about the art of hygge (Danish concept of coziness) and how cooking plays into our health and wellness.

"Hygge is our culture, part of our daily life," Hahnemann explained. Now hygge is becoming a trend that is marketed. Hahnemann shook her head and told us, "That is just weird. To be hygge comes with expectations about atmosphere. It is not a concept, not a commodity." Similar to Swedish fika, hygge is now used a a verb, defining an event that was nice, pleasant, with an atmosphere where everyone feels good, calm, in sync. And, most importantly, drinking coffee and snacking on cake. "That party was so hyggly."

Hahnemann grew up with "hippy parents" on a commune, and while at the time Denmark generally cultivated a homogenized food culture, on the commune Hahnemann learned about the foods and cultures from Palestinian and Latin American refuges. Every night dinner included very non-Danish flavors such as hummus and eggplant.

When visiting her traditional grandparents, Hahnemann learned berry picking, jam making, and the importance of coffee breaks. "We have three meals and three fika each day!" she told us. When guests arrive, "Always offer coffee and cake." The Danish baking culture comes from the practice of welcoming neighbors to a slow, relaxed conversation while enjoying fika.

"I received this gift from my grandmother: to understand seasonality; what and when to cook." Hahnemann pointed out the similarities between Danish and Minnesota lifestyles: living in a northern climate defines the way we eat. The cold and the light (should) guide our food choices. "There is always something to look forward to with the seasons." As for diets, Hahnemann prefers common sense eating. "Eat things that taste good and you will eat less."

While we can define what we eat as local, that doesn't necessarily mean we should eat only things that are indigenous to our region. We should eat food that make sense, such as imported spices (and bananas, the number one fruit eaten in Scandinavia). When you purchase food from other regions, reach for those that make sense (such as organic, fair trade bananas that come by ship). Just as she learned from her time living in a commune, Hahnemann reminded us that when we eat flavors from other regions, we learn about the people who live there. "Trading with each other means we know each other. If we know each other we are not afraid of one another."
Email Post
Labels: books coffee cookbooks FIKA Gen X Minnesota History Center sustainability Swedishness