Gratitude in the dark 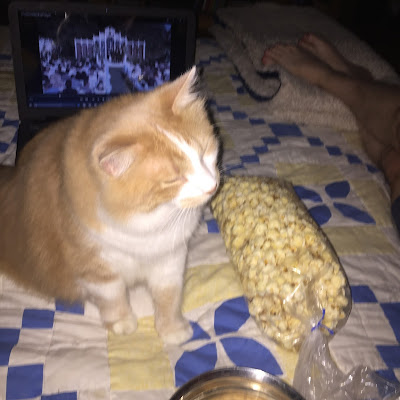 Our power went out for three days a few years ago. The first night was sort of fun and magical. We skipped through the neighborhood, made new friends, drank wine from a box, and had a pretty good time.

The second day was filled with neighborhood camaraderie. We shared information on the best places to find ice (many stores in our area were sold out, or also without power) and rumor-mongered about when the lights would come back on. The neighbors across the street (who, by some miracle of city planning, are NEVER without power) allowed friends to run extension cords from house to house, sharing their good fortune and valuable electricity.

By day three our happy little neighborhood became Lord of the Flies (the zombie version). We were covered in mosquito bites, without a vacuum our house was filthy, and it was time to toss our food. We were out of wine. And the continuous bass buzz of multiple generators was taking its toll on me and our cat Orson.

After those three days without electricity I learned some important things about myself: As much as I love reading Laura Ingalls Wilder's accounts of pioneer days, I don't want to reenact them. I'm a little too delicate to camp. No electricity? No way. No hot water? No thanks. No fan to keep me comfy while I sleep? No sleep.

Last night we were on the road as storms approached the Twin Cities. Some guy called into the radio station we had on, saying the skies were unlike anything he'd ever seen. "Looks really bad!" his voice cracked with excitement and fear, "This is just something to behold."

T and I chuckled and agreed, "Must not be from Minnesota." We Minnesotans tend to be smug about our weather. We are stoic survivors, and it takes a little more than a clap of thunder to scare us.

As we drove closer to home, the storm hit. Wind and sheets of rain rocked our little car and I crossed myself and said a few dozen Hail Marys (As Ralphie in a Christmas Story says, "Let's face it, most of us are scoffers. But moments before zero hour, it does not pay to take chances"). T drove the car with both hands tightly clasping the steering wheel and kept muttering, "I've got to get home to my boys. I've got to get home to my boys."

Trees and branches flew around us, garbage cans tumbled into the street. Roads were flooded and we floated a few times. As we pulled into the driveway I heard another radio caller describe the lighting that hit near our local mall and how the power was out.

Our house was dark and wet. The wind blew water in from every open window. The boys were riled up but none the worse for wear. We dried off and got our emergency stash together: flashlights, DVD to watch on laptop with most battery left, and snacks.

In the middle of the night I woke to a familiar sound. The neighbors four doors down were running their enormous and enormously loud generator. I'd forgotten the hell of that noise.

Tonight we are armed with plenty of ice and earplugs. I might not be pioneer material, but I know how to get a good night's sleep in just about any situation. Of course, it is easy to sleep when you are filled with gratitude. We've got no damage to our house, no water in the basement, and the enormous trees that line our yard are still standing. T managed to save most of our refrigerated food and we won't starve (Hey, you don't need electricity to light a charcoal grill!). We'll have power back eventually, unlike folks who live through a major disaster or live in places without resources.

The biggest problem we need to solve tonight is which DVD to play in the laptop that's been charging at my office. If I complain too much, remind me of that.
Email Post
Labels: good manners grilling