No use crying over spilled aquavit 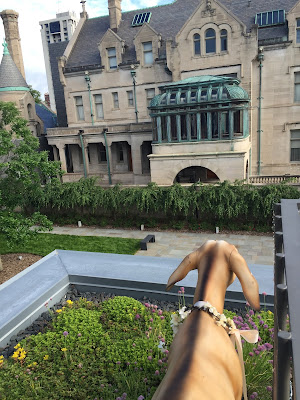 Frejya is this cool goat gal pal of mine who lives at the American Swedish Institute (ASI), keeping an eye on things, making sure everything runs smoothly. She wanders around, but once summer arrives Frejya prefers all-day dining on the green roofs overlooking the mansion. As you can imagine, Frejya has seen a lot since her arrival coincided with the expansion of ASI's campus in 2012. Has it really been four years?

We've enjoyed cocktail parties and lectures, concerts and art exhibits, and visits from dignitaries. We've eaten crayfish and sang Swedish drinking songs with strangers who quickly became friends. There have been delightful meals at FIKA and cooking classes down in Paulson Hall. Whether Midsommar or Jul, ASI opens her doors to us and Frejya reminds me of how far we've come together.

Yet nothing could have prepared Frejya and I for the Fäviken frenzy that we witnessed (OK, I admit, we participated in) when it was announced that Swedish chef, author, and photographer Magnus Nilsson was coming to ASI to introduce his photo exhibition. We Nordic nuts lost our collective minds. You could spot us pretty easily: we were the ones carrying around sacred copies of Nilsson's "The Nordic Cookbook" (a formidable publication that documents the diverse cultures, traditions, and foodways of the Nordic region and includes 700+ recipes, countless photos... and weighs approximately 25 pounds) and limping from the heft. We binged on Netflix episodes of PBS's "Mind of a Chef: Season 3" and "Chef's Table" which featured Chef Magnus. We ate a lot of herring and rye.

As each Chef Magnus event was announced, our hysteria heightened. We rushed to register for guided tours, a recipe exchange, local spirits and beer tasting, multi-course dinners prepared by some of the best chefs in town, and a lecture/book signing by Chef Magnus himself. I prepared by combing through my already well-thumbed "The Nordic Cookbook" and memorizing questions I would ask the chef if an opportunity arose, silly things like: "What did your family eat on Christmas Eve?" "What is your favorite cookie? Pizza topping? Movie?"

Wednesday we frolicked on the lawn outside of the mansion for a party and preview of the Magnus Nilsson photography exhibit. We ate hotdogs, Juicy Lucia's, and fried pickles, while enjoying generous pours from Gamle Ode, Du Nord, Far North, Fulton, Indeed, and State Fair. There was music, kubb, and warm fires. And there was Chef Magnus.

Whenever I get too giddy with joy, I tend to make a fool of myself blurting out any goofy thing that hovers between my brain and mouth. Thankfully each time I got close to Chef Magnus I clammed up like a nervous schoolgirl, smiled a lot, and said appropriate things like "Thank you! Thank you! Tack!"

By Friday I was ever so slightly impressed with myself for maintaining self-control around the esteemed Chef Magnus. I arrived at ASI ready for the recipe exchange and Origins of Nordic Food lecture from Örebro University's Professor Richard Tellström. I viewed the exhibit on a guided tour with Chef Magnus and an entourage while Chef M gave insights into each image. All the while I maintained my cool.

My friend M and I reapplied lipstick, I changed into less comfortable shoes, and we headed up to dinner. We each collected a glass of Pinot, ever calm, and nibbled at passed hors d'oeuvres of white fish and pickled onions. We were to be seated next to the recipe exchange lecturer, and he joined our conversation. Music played and we could smell amazing things coming from the kitchen.

Dinner arrived and course after course, each more stunning than the one before, kept us occupied. One by one the evening's chefs were introduced and we applauded them and skålled with aquavit. Prof Richard pulled a tiny music box from his suit pocket and played "Helan Går" as we table companions did our best to sing along.

A wise man once said, "Oh, life is like that. Sometimes, at the height of our revelries, when our joy is at it's zenith, when all is most right with the world, the most unthinkable disasters descend upon us." (I call it life keeping me humble.) Sitting at that beautifully set table, it was as if I'd been taught manners from my cats. First, in my greedy haste I shoved an entire mouthful of fish bones into my mouth. Just as my dining companions decided it was time to skål, I began spitting macerated bones into my napkin, then sheepishly handed the foul thing to our attentive server. I recovered and soon we were taking selfies: me and M, the professor and his neighbor, me and the professor. Evidence now demonstrates that I had a large black thing in my tooth for all photos. Finally, in my excitement to be served the lamb course, I thwacked a shot of aquavit across the table with my fork (possibly onto the professor's lap). Humility knocked, and I answered.

After dinner, M and I found ourselves among the private festivities of the cooks and watched Chef Magnus and his new kompisar (buddies) knocking a piñata until the candy spilled forth. I attended one more event the following morning, with Chef Magnus speaking and then signing books, but already the week reached perfection.

Frejya and I will discuss these events for years to come. I am sure of it. 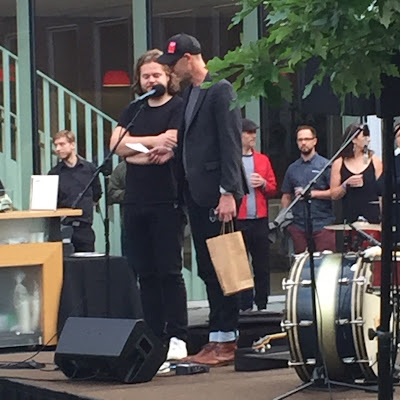 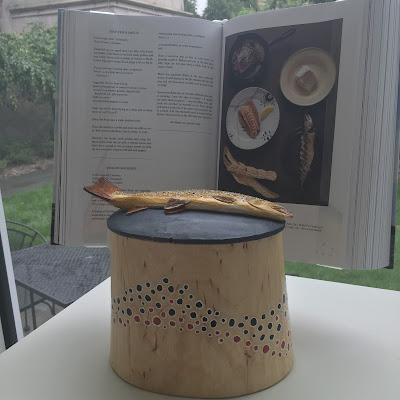 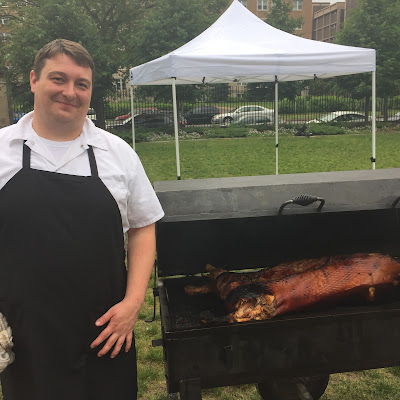 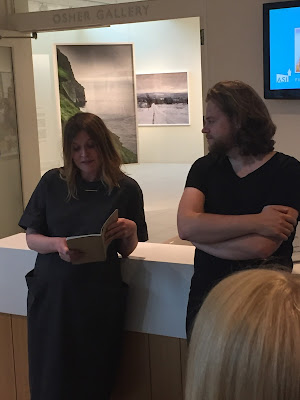 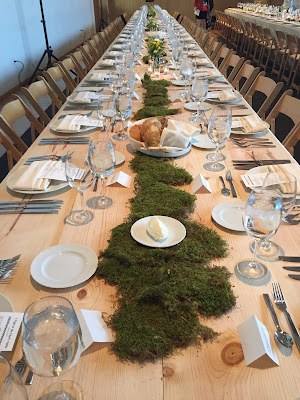 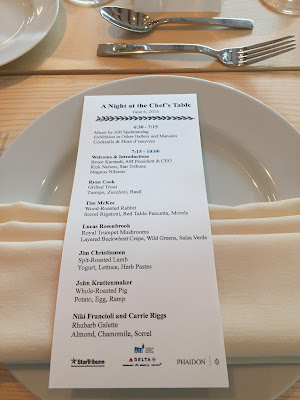 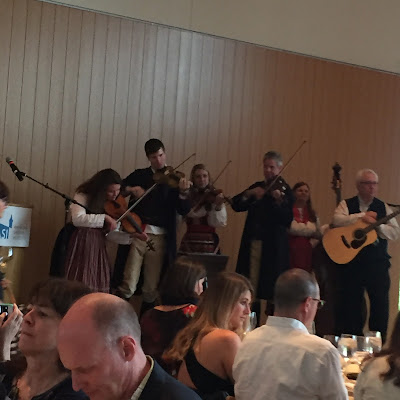 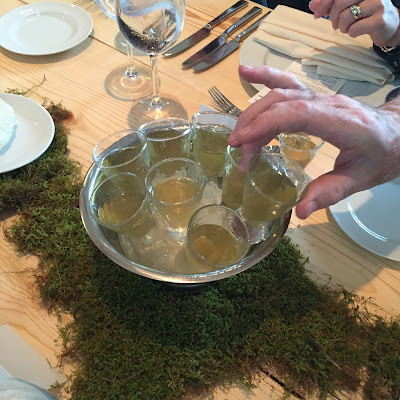 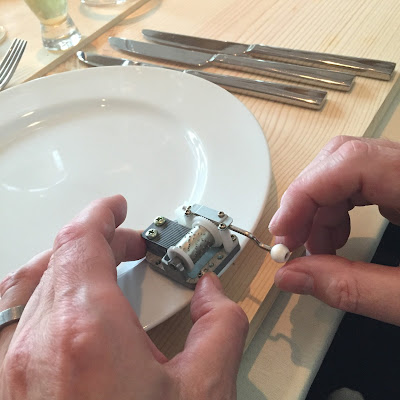 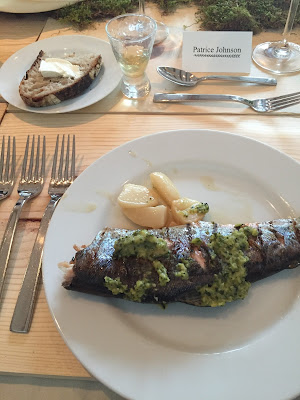 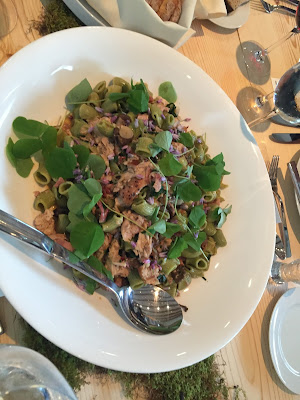 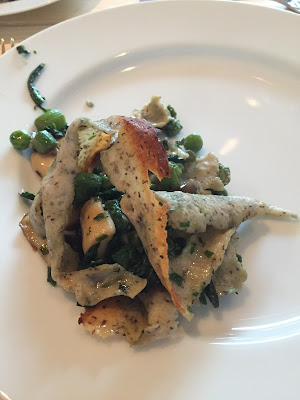 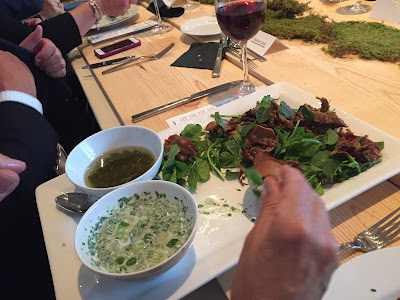 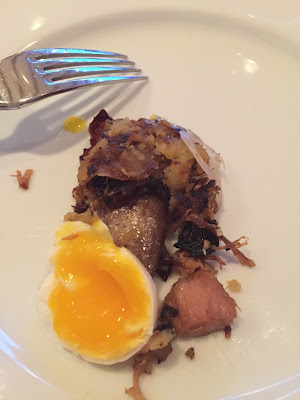 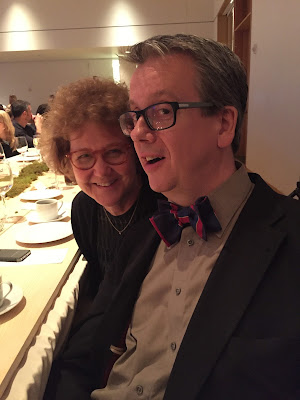 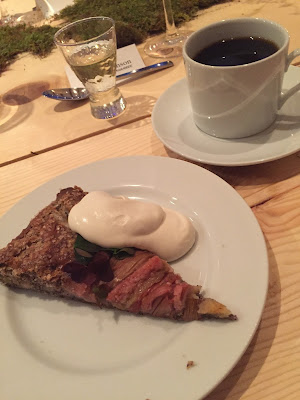 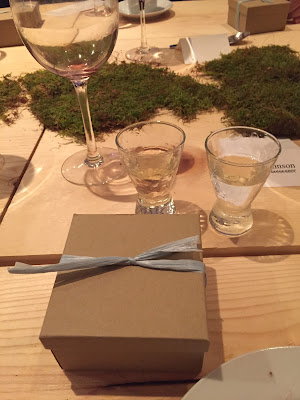 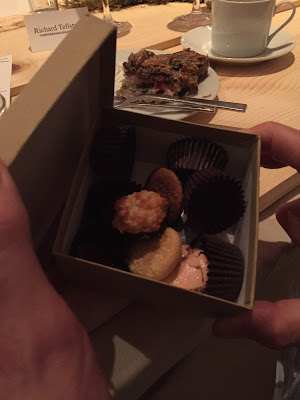 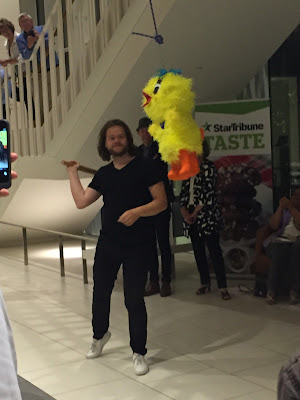 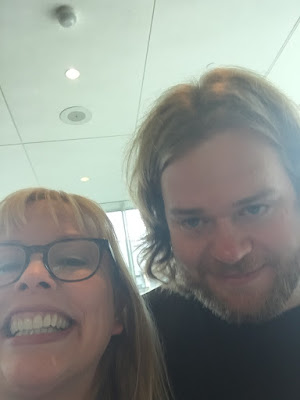