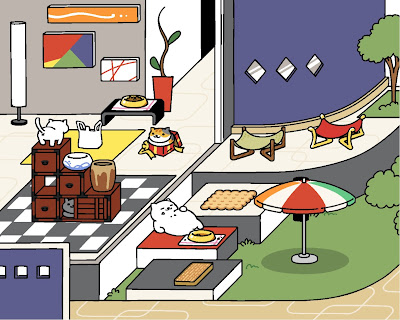 Sometime back in the early aughts T and I took a week off between Christmas and New Year's Eve (aka our wedding anniversary). We spent our time relaxing, watching TV, and playing video games. In fact our daughter had recently introduced me to a new game called The Sims. I loved playing Sims so much that we brought our bulky PC into the living room where we were camped out so that I could play from the comfort of our holiday nest. When a friend called to invite me for an afternoon of skiing, I explained to her that I was playing an imaginary game of life that, at the time, was more appealing than the real thing.

For the uninitiated, The Sims is a world that players create by building homes and neighborhoods and filling them with furniture and people (and in later versions: animals, cars, malls, restaurants, etc.). The object of the game (I think) is to create individuals who live happy successful lives. Sims (the people who live within the game) must be monitored to make sure they are fed, clean, and emotionally fulfilled.

That first week of playing Sims was wonderful. I built pretty little houses filled with comfortable furniture and random art. I grew beautiful gardens in the yards and every home had a pool. I memorized the cheat codes so that none of my characters had to work and there was always enough money to add fancy additions, hire a maid and gardener, and order pizza delivery.

I was never very good at The Sims. The character monitors would flash messages to me that my Sims were sad, hungry, dirty, or in desperate need of the bathroom. The one room without a smoke detector would erupt in fire, the house without an alarm would get robbed. The maid would stop showing up and the houses filled with garbage. The gardener disappeared and all of the gardens withered. My Sims usually died within a few hours of creation.

Recently I began playing a new imaginary game of life, although rather than attempting to keep Sims alive I am now collecting Neko Atsume cats. Neko Atsume is a phone app which guides players to lure kitties to a cartoon yard/room into which we place various toys, kitty condos, and food. I fill my little kitty photo album with images of them sleeping in cushions shaped like a burger and playing with a bunny-shaped toy. I am giddy when one of them leaves me a memento (A memento is an imaginary gift that demonstrates the cat's affection toward the player. Mementos vary according to cat. So far I have received mementos such as a shiny acorn, damp matches, and a small bell that does not ring. According to the app creators, when a cat leaves you a memento it is proof that the receiver of the gift has become a cat's friend. Let's face it, we can all use a few more friends, whether real or imaginary.). The object of the game (I think) is to collect all of the cats who may possibly wander into your yard and receive mementos from them.

Your might think that a person who lives with two cats would have no use for a fake yard of imaginary cats or a collection of illusory gifts. But our dear sweet ungrateful little beasts generally ignore me and only seek me out when they need something material, like a full dish or a clean litter box. They prefer T which leaves me with an empty lap. Pretending that fictional cats want to spend time near me fills a need that Oskar and Orson are not willing to meet.

Sadly, I am as rotten at playing Neko Atsume as I was at Sims. I've had the app for months and have yet to collect all of the rare cats. Only a small smattering of regulars visit my yard no matter how much expensive food I put out for them. Thankfully, the app developers have not yet added the "death" function to this game. For now, when a Neko Atsume cat is done with your yard, she simply wanders away. If my pretend kitties started shaking their fisted paws at me because I am unable to feed and entertain them, I'd have to stop playing. Heck, I already have that with my real cats. 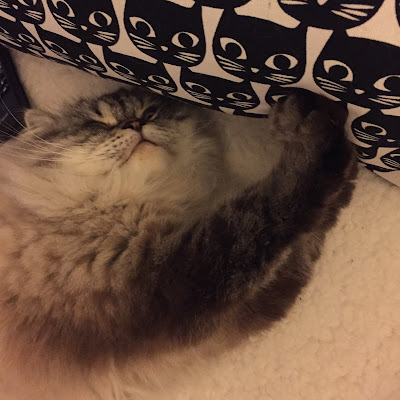 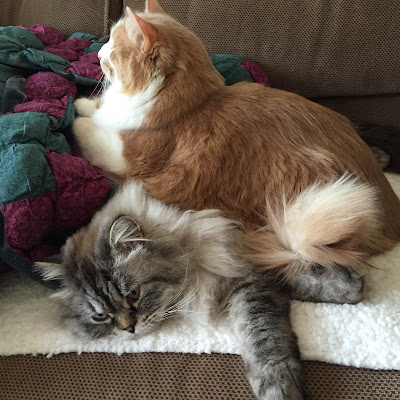