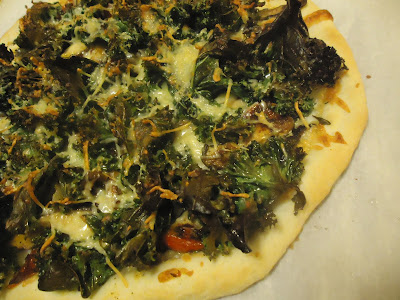 Like watching Fargo or The Walking Dead, or memorizing all of the lyrics to every Taylor Swift song ever recorded, kale is one of those cultural icons that everyone who is anyone claims to love. But god I hate kale. I just hate it.

I actually boarded the kale bus pretty early (and immediately asked for a transfer). Ten or fifteen years ago I started reading online about the miraculous green and began experimenting with ways to make the vile weed edible. Before the green became trendy, I was making kale chips and trying to pawn them off on coworkers. I added kale to soups and hotdishes, hoping my daughter wouldn't notice the off flavor and texture in her tuna casserole. (Ironically, my now-adult daughter eats more vegetables, including kale, in a day than most people eat in a lifetime.) After our rough beginning, I broke up with kale and never looked back.

Enter Fig to Fork. I signed on the to food delivery service this summer and if you've seen my postings about them you already know what a huge fan I am. Occasionally the box will contain ingredients I am not too keen on, but in an effort to open my mind and expand my menu repertoire I promised myself that I would add even the unlikeable ingredients to our meals. Happily, the results thus far have been pretty spectacular. I'm now indulging regularly on Brussels sprouts and cauliflower. Who'd have predicted?

And then came the kale.

UGH KALE THE VILE WEED! Oh Fig to Fork, how could you do this to me?!

A promise is a promise, even when made to myself. In an effort to make kale edible, I added my least favorite food to my most favorite food: kale + pizza = (I hoped) delicious. And it was!  Next time (oh dear, did I just write that?) I might add some nuts to the base and perhaps some chopped apple.

In small mixing bowl combine yeast, sugar, and water. Set aside until foamy, about 5 minutes. Meanwhile, in bowl of food processor fit with metal blade combine flour and yeast. Turn processor on and add yeast mixture and olive oil until ball of dough forms. Place dough in bowl with a few teaspoons of olive oil, turning dough so that it is well oiled. Cover with plastic wrap and set aside in draft-free area until dough doubles in size, about 2 hours.

After preparing dough, in very large bowl combine kale and a tablespoon or two of olive oil and then toss with plenty of salt. Set aside while dough rises, tossing occasionally to evenly distribute olive oil and salt.

In large saute pan heat remaining olive oil over medium high and add mushrooms. Cook, stirring occasionally, until mushrooms begin to brown and soften. Add red pepper and onion, tomatoes, garlic, and a few teaspoons of thyme leaves and continue cooking until vegetables are soft. Salt and pepper to taste.

Line baking sheet with parchment paper. Place kale on paper and bake in preheated 400 degree oven until edges of kale begin to brown and crisp, about 5 minutes. Toss kale and return to oven for an additional 3 to 5 minutes.

To assemble:
On parchment paper push dough into a 12-inch round. Cover with mozzarella and provolone. Dot with a teaspoon of thyme leaves. Par-bake in preheated 450 degree oven until cheese just melts, about 5 to 7 minutes. Evenly distribute mushroom mixture over cheese, top with kale and Parmesan, Return to oven and continue cooking until Parmesan is melted and just turning golden, about 5 to 10 minutes. 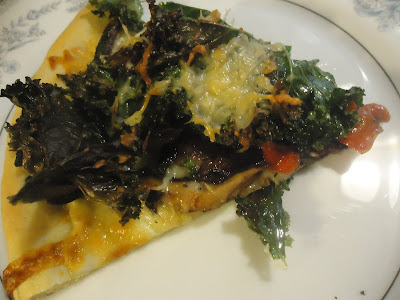 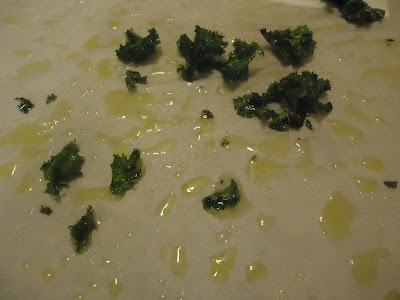