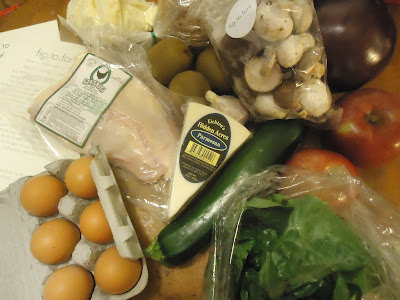 I look upon Friday's ingredient list with excitement and occasional skepticism. Listed are the items that will be delivered the following week from Fig to Fork. A recent list had me thinking, "Yum, I love mushrooms and cheese. Good deal, we need eggs. Chicken, T's loves chicken!" Pause. "Huh. Polenta. Not my favorite."

Then the culinary box arrived and I assembled dinner. "May as well make this polenta. It came with the box so we should eat it."

A funny thing happened in my kitchen. I followed the instructions provided by a local chef and the fluffiest, creamiest, most flavorful polenta ever known cooked up on my stove. We were in supper heaven. A menu overview for that polenta week: we got three meals and leftovers from the generous box, including the suggested recipes for polenta with mushrooms, chicken, and a balsamic reduction; marinara (included in the delivery) over polenta; and ratatouille made with remaining box ingredients and some veggies I had in the garden over yet more polenta. It was a very good week in our kitchen and in our tummies. 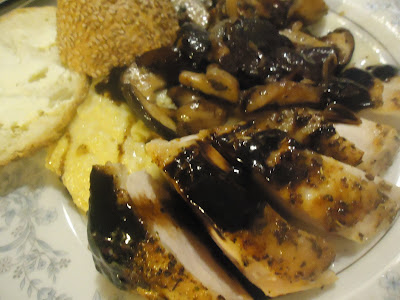 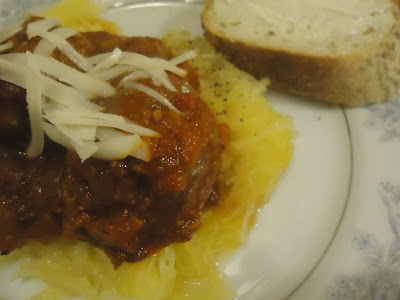 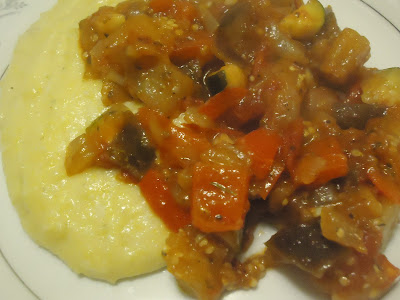 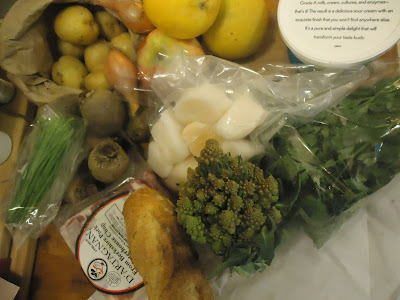 Fig to Fork ingredient skepticism has happened more than once, and it happened again this week. I do not like cauliflower. I scoff at people who refer to planks of cauliflower as steaks. I gag at the smell. I certainly don't entertain thoughts of cooking, serving, or eating the vile stuff.

But there it was. Among the scallops, beets, potatoes, bread, sour cream, herbs and fruit was a pretty little pine cone-shaped green Romanesque. I scowled. Paint it green, purple, or yellow; underneath the flowerettes hid the white vegetable devil.

I chopped and bubbled my way into kitchen bliss, following recipes for parsley ravigote and an orange reduction, scallops seared and then basted in butter. Reluctantly I added the cauliflower to my roasting potatoes. The finished plate was beautiful, and I put aside a healthy portion for T who was working late. Everything was delicious, shockingly even the the cauliflower; as crunchy and salty as a good bowl of popcorn. I snuck back into the kitchen and nibbled at more of the cauliflower again, and again, until I realized I'd eaten every crumb of the Romanesque and all that was left for T was a pile of roasted potatoes, a few scallops, and some of the bread. Thankfully there was plenty of good stuff from our delivery to feed us our next meal: beet and apple slaw and a chubby pork chop.

I am quickly getting used to playing with new ingredients, and eating with an open mind. 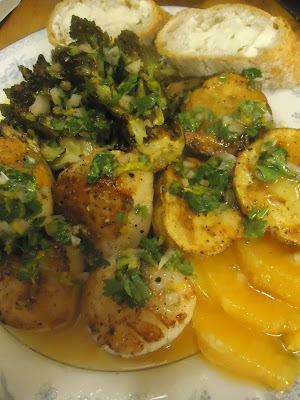 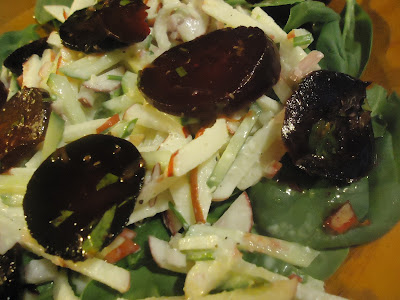