Who says you can't go back? Taco Bell's Meximelt 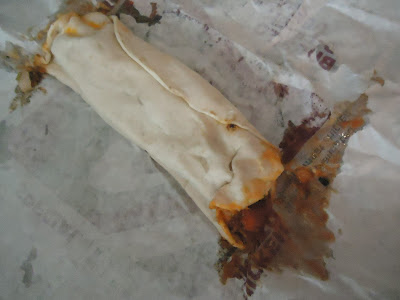 Youth is easy to romanticize because so many of us spent it in an All You Can Drink Ladies Night 3.2 beer-induced haze. I retell the stories to young friends, instructing them about the changes that have occurred these past few years. I’ve become the old guy telling his grandkids that in his day they walked five miles to school, uphill both ways, but that somehow things were so much better back then.

“We didn’t have texting or sexting or Facebooking. The only thing we had to worry about was whether we had gas in the car to get us to Gabby’s, Aqua Net in the purple can to tease our mall bangs, and change for a post-dancing Run to The Border (a.k.a. Taco Bell).”

No retelling of my youth is complete without a description of my friend Krissy. Man, she could work it. She’d slither in close to some poor schmo and flirt, pretending not to believe he was telling her the truth about his name, age, or address. She spoke a sort of whiny stuck-up Minnesota variation of Valleyspeak, and her upper lip curled when she asked to see his wallet and with his permission (usually) snag a fiver. Sometimes she was desperate and less subtle. “Give me a smoke!” she’d demand. “What’s in your wallet? How much money do you have? Can I have your money?”

As obnoxious as she was, very few men said no to Krissy. Why would they? She was as beautiful as she was bossy and mean. Krissy never bought her own cigarettes and or paid for a Meximelt.

Ah the Meximelt. That sultry summer we danced and laughed and kissed cute boys, and watched in awe as Krissy finagled her way through a lineup of men willing to pay her way. The Taco Bell drive-thru crowned each Ladies Night and we scrambled for enough loose change to purchase warm tortillas rolled around cheese and salsa. Economical and filling, Meximelts were substantial enough to neutralize the cheap beer that rumbled in our tummies. The memory of those melty, cheesy, tomato-laced wraps lingers like smoke from Krissy’s Marlboro and a whiff of Aquanet.

A recent retelling of Krissy’s Legend reminded me that I haven’t had a Meximelt in years. The tradition was dropped around the same time I lost interest in nightclubs. Would the gooey treat hold the same appeal if I ate it for lunch rather than as a chaser to an endless keg stream of Bud Light in a red Solo cup?

I walked into Taco Bell and wove my way through the metal line dividers (something I probably couldn’t have accomplished after a night of debauchery). I ordered one Meximelt and loaded up on Fire Sauce (I used to douse my Meximelt with extra salsa, although extreme hot sauces were unknown to most of us in Minnesota, and superhot salsa still does not exist at Taco Bell.).

At home I sat on the couch and placed the Meximelt before me on the coffee table. I unwound the parchment that swaddled it. Inside the tortilla didn’t appear as ample as those I ate in my memories. Grease oozed out of each end of the edible tube and puddled the paper. I unrolled the tortilla just enough to make room for a few packets of Fire, then rewrapped it and took a bite.

Yup, just as I remembered. The cheese and tortilla were soft and warm, and as I pulled the wrap from my mouth a string of melted yellow goo dangled for just a moment between me and my food; a precarious and delicious cheese wire. Small bits of tomato burst forth and balanced the richness of the goo, like a sort of poor man’s caviar.

There is no shame in indulging in the occasional fast food repast, right? God, that Meximelt was good. I closed my eyes and heard Krissy’s laugh and smelled her Giorgio perfume. The car radio was on and we jammed with the windows open as Bobby Brown sang “My Prerogative” and Salt-N-Pepa told us to “Push It.” In my memory of that summer there is always room for another Meximelt.

Taco Bell
Various locations
http://www.tacobell.com/
Price: $1.99 plus tax and worth every cent.