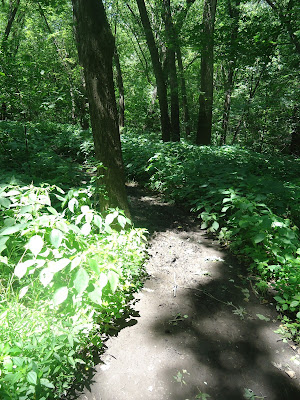 Summer in Minnesota is all about sunshine and the outdoors. We face the sun and bathe in its warmth. We try to ignore the mosquito swarms and keep jugs of rubbing alcohol in the trunks of our cars in case we find ourselves hiking near poison ivy or oak. Nature cannot keep us from our resolve to commune with it.

T and I hike the trails across our state and Wisconsin. On weekends when time is short, we pretend we are tourists in our own backyard and explore the hundreds of Twin Cities parks. Last Sunday we wandered over to Hidden Falls Park along the Mississippi. Hidden Falls is one of those places you forget about until fate places you on the road that drops down into the park and you think, "Why don't we come here more often?"

Without a map or recent memory of the actual location of the falls, T and I walked past the beach and along the river beneath the high voltage power lines. "Listen to those bugs," T said. We heard the low hum of some unknown insect rise and fall as we walked. "Or maybe that buzzing is from the power lines," T mused.

We'd walked for half an hour along the tree lined path until the trees disappeared behind us and we could see Fort Snelling and hear the highway just ahead of us. "I don't think we are on the right path to the falls." We returned to the beach and searched for another path.

At the picnic area a young couple shouted to us, "Do you know where the falls are?"

"We think they might be this way!" we shouted back to them as we ducked beneath the bushy trees. "We saw a group of people enter this path earlier!"The couple trailed behind us, hopeful that we knew the way.

"I came here in the sixth grade," the boyfriend told us. "If you see a bench up ahead we are in the right place." He grinned and giggled, holding tight to his girlfriend's hand. His excitement was kind of neat and I wished it was contagious.

But mostly I just felt annoyed. I wasn't really in the mood for a hike and although the day was mild I could feel sweat dripping between my shoulders. A mob of mosquitoes dive bombed my head while their friends tore away at my bare legs. Deep into the forest (OK it was probably just a few city blocks worth of walking) the path became a deep muddy mess and a fence blocked our way.

"I feel like we are in one of those movies where the explorers go into the woods and are killed in a horrific manner," I said. The young couple looked slightly alarmed.

Again we turned back to where we began and in front of us the young couple quickly trotted out of the thicket.

One path remained untested. T convinced me to give it a try. After a short walk we arrived at the Hidden Falls. The boyfriend was giddy as he lead his girlfriend up the incline to the water.

The anticipation of something really spectacular and the work required to get there should have made the experience awesome. In the end the falls were lovely but I was still crabby. What is that saying? Something about life being about the journey, not the destination. I counter, occasionally (like when you get lost or mosquitoes are attacking you): If not for the destination, why take the path?

Summer in Minnesota is all about the path, the destination, and people who remind us to be excited about both. 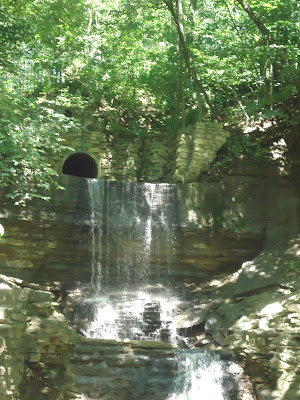