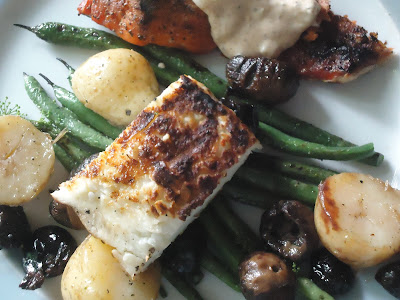 Our favorite co-op recently tweeted a message about grilling halloumi cheese and I soon found myself at their cheese counter listening to another shopper talking to the monger about the same tweet that lured me there. Heck of a tweet.

Halloumi is the Greek's answer to Wisconsin cheese curds. While curds will always trump every other squeaky cheese in the world, it is fun to fry up a slab of the good hardy Greek stuff especially during the cool winter months when we eat it with olives and bread. Halloumi is dense and has a high melting point which makes it perfect for the fryer, the oven, or (as I learned last week) the grill.

I sliced the halloumi into 1 1/2 inch thick squares and grilled over direct heat, turning for grill marks that never appeared, until a nice brown crust formed. We ate it with a sort of reinterpreted Salad Niçoise (a la Minnesota!); grilled green beans and mushrooms, and salmon topped with a homemade tartar sauce (mayo, Dijon, lemon juice, olive oil, and chopped dill pickles), boiled new potatoes tossed in vinegar and lots of dill from the garden, and good briny olives.
Email Post
Labels: appetizers cheese grilling salad