Who says you can't go back? Rocky Rococo's Pizza 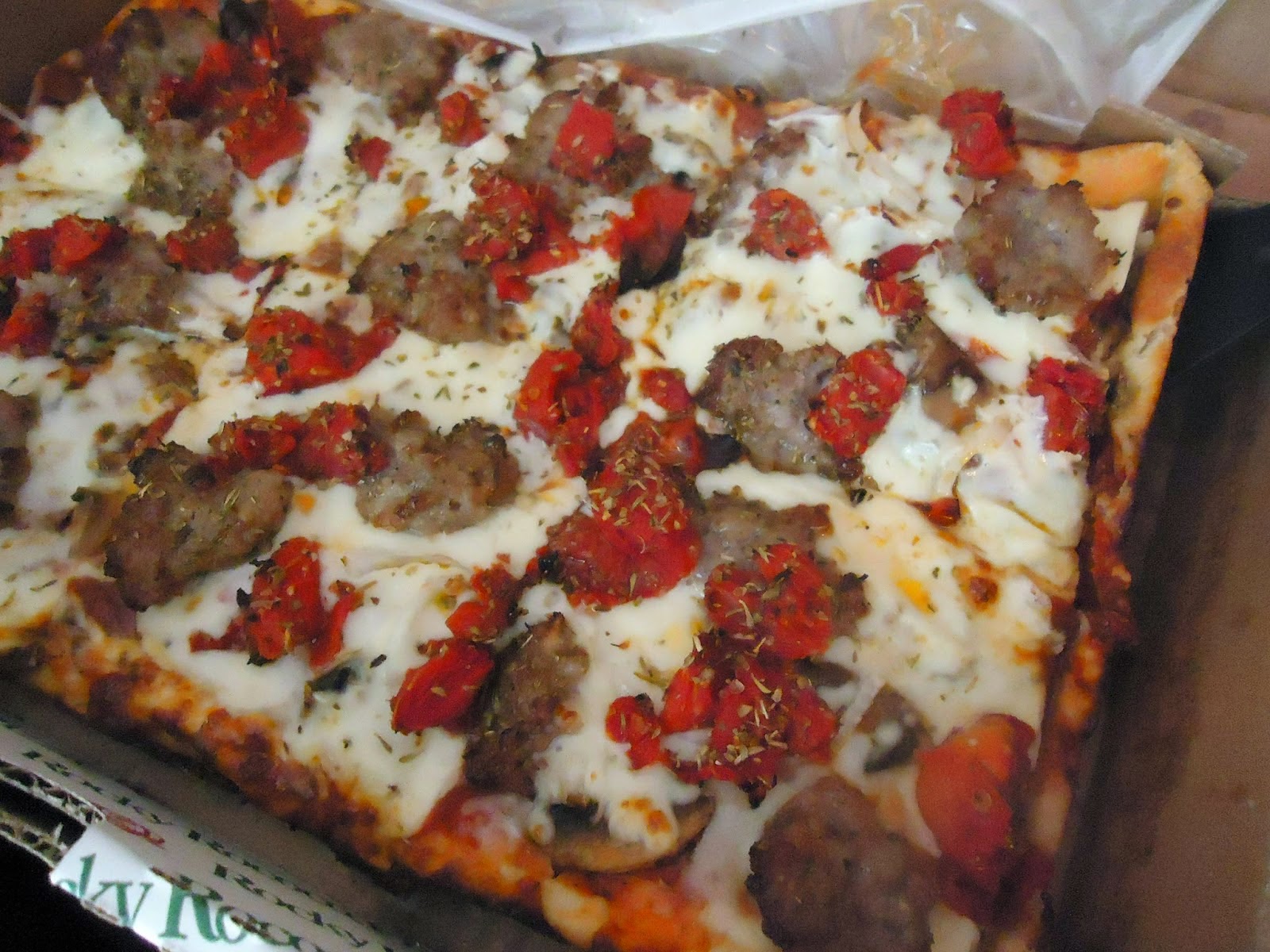 Youthful memories are heavy with the flavors of indiscretion. Gen Xers didn't worry about fat and carbs, sugar and corn syrup. Orange-dusted Cheetos-fingers were a badge of honor and dipping into the donut box for a second custard-filled was considered good form.

T and I often wonder if those flavors of youth hold up a decade or two (or three) later. Our discussions get pretty intense. Would an Orange Julius taste as fruity and foamy today as it did back then? What about a Chilito from Zantigo or a Meximelt snagged from the Taco Bell drive-thru after a night of dancing? Or does time (and taste buds no longer coated from last night’s kegger) change our perception of favorite foods of yore?

Some chains (remember Rax?) no longer operate in the Twin Cities and others have downsized to just a few local joints (A&W, Rocky Rococo's, Zantigo). Dairy Queen now owns Orange Julius. But a lot of stuff we used to eat is still around in some form or another.

And so begins our quest. Will a taste of youthful favorites bring us back to that time, if only for a few bites? Will today's reality hold up to yesterday's recollection? T and I are going to spend our summer facing the past and tasting a few of our favorite fast foods from the 1980s. Yup, we are reaching into the way way way back drawer and pulling out some awesome tube socks.

First up: Rocky Rococo’s
I've always had a rags to riches back to rags love of pizza. It is no secret, and I harbor no shame in admitting, that I love pizza cheap, expensive, frozen, fresh, and grilled. I love them with plenty of toppings or few. I love them fat or skinny, chewy or crisp. I love them in every style, size, and shape from Neapolitan to Chicago, New York to Detroit. Rocky Rococo's was my first taste of Detroit-style.

Memories: There was a time when pizza delivery hadn't quite found its way into the Twin Cities' northern suburbs. Frozen varieties were more likely to land on our weekend tables than fancy takeout pies. Rocky Rococo's caught my attention somewhere during junior or senior high school when the Wisconsin-based pan-style (eh hem, you say "pan," I say "Detroit") chain opened at the mall near our house.

Some friends wanted an after school snack so we headed into the store to grab a cup of bread sticks (cheap) and water (free). We walked into the store and I was hit with a smell I've come to know as Rocky's: air thick with an unidentifiable oil, oregano-spiced tomato sauce, and an oddly comforting combination of damp dough steaming in coated cardboard.

Pizza-by-the-slice was the main attraction, as were the aforementioned bread sticks which now come with a choice of dipping sauces, including the original marinara and nacho "cheese." Slices came with traditional toppings such as pepperoni, sausage, the vegetable show stopper "Garden of Eatin,'" and a Super Slice of the Day which boasted a giant slice of pizza with toppings specific to a particular day of the week. As the single slice box opened, steamed essence of tomato and mozzarella escaped and tiny effervescent droplets dangled from the lid's underside. Steamed pizza beads were part of the experience. While I was creeped out by Rocky's spokesmodel who bore a strong resemblance to Father Guido Sarducci (a recurring character on Saturday Night Live), that never stopped me from ordering Uncle Sal's Spectacular: sausage, pepperoni, mushrooms, onions, tomatoes and oregano (pictured above).

Flash forward to 2015: T and I head out to my old stomping grounds for a visit to the only Rocky Rococo's that remains in Minnesota. The Brooklyn Park location is slightly faded and sometimes the floors are sticky, but the staff is friendly and the pizza is as good as we remember. The store still has that oil-oregano-damp-dough aroma, and single slices still come in coated cardboard boxes misty with steamed pizza beads.

For those of us with glad memories of Rocky's pies, happily not much has changed. The pizza is thick and square with fat almost gooey crust, oozy mozzarella, spicy tomato chunks and sauce. The beauty of a thick crust is that it can stand up to loads of toppings and Rocky's offers hardy cuts of meats and vegetables. Each bite of Rocky's sausage is the size of a meatball and full-flavored with fennel. Onions, peppers, and mushrooms are cut big enough to see and to taste. This isn't dainty fare, but it is savory and rich and tastes exactly as we remember.

Today we are more likely to order an entire pie rather than the slices of our youth. While we wait T and I gorge on bread sticks. Gnawing on a hot hunk of dough (sprinkled with Parmesan cheese that comes out of a packet) dunked in marinara reminds me of where I came from: no frills or pretenses, nothing fancy or snobby, and flavors that prod me to appreciate the plate (er... box) placed in front of me. One bite of Uncle Sal's heavily doused with red pepper flakes and I return to the 80's when my needs and tastes were as simple as a single-serve slice of steamed pizza. 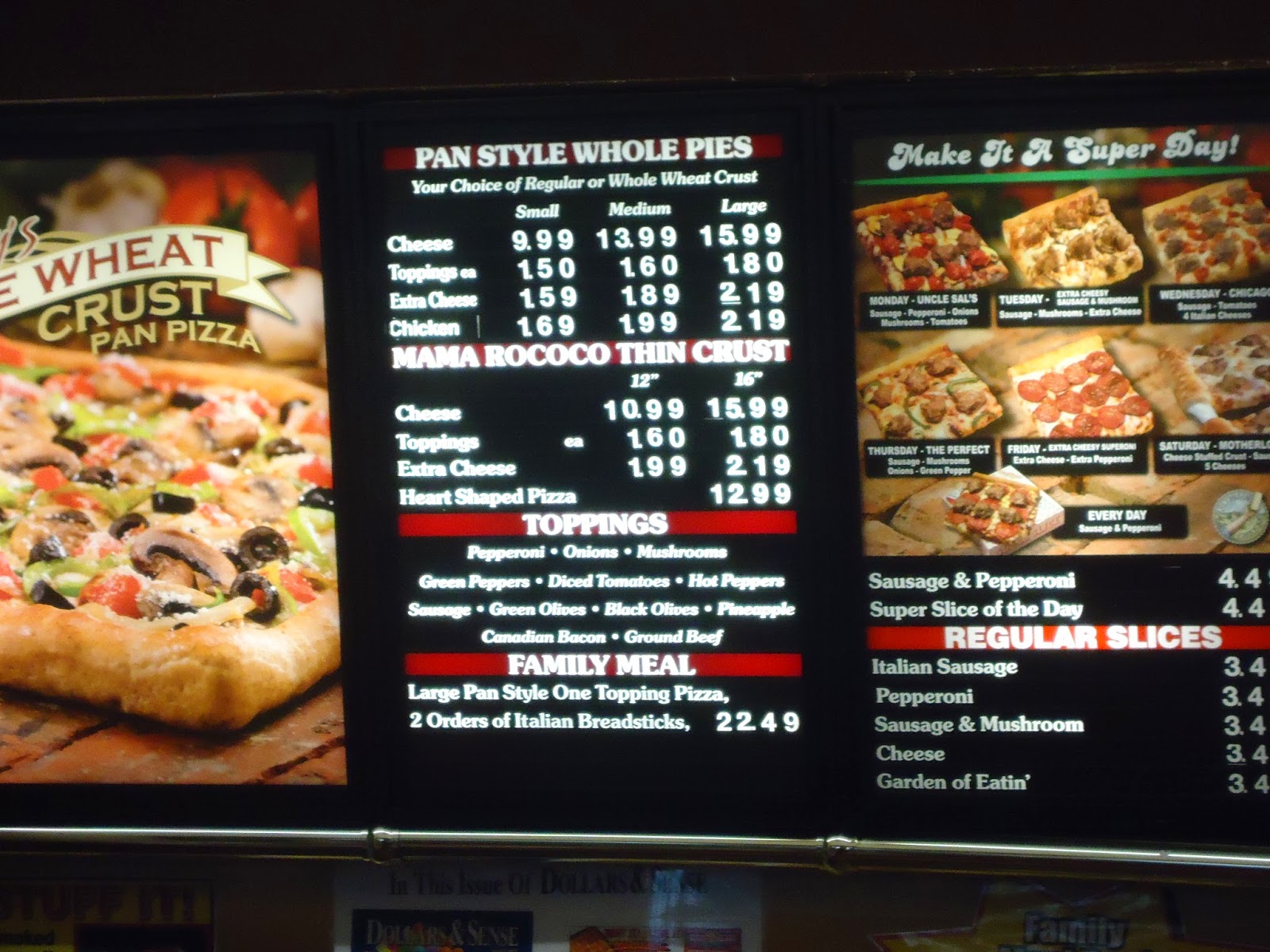 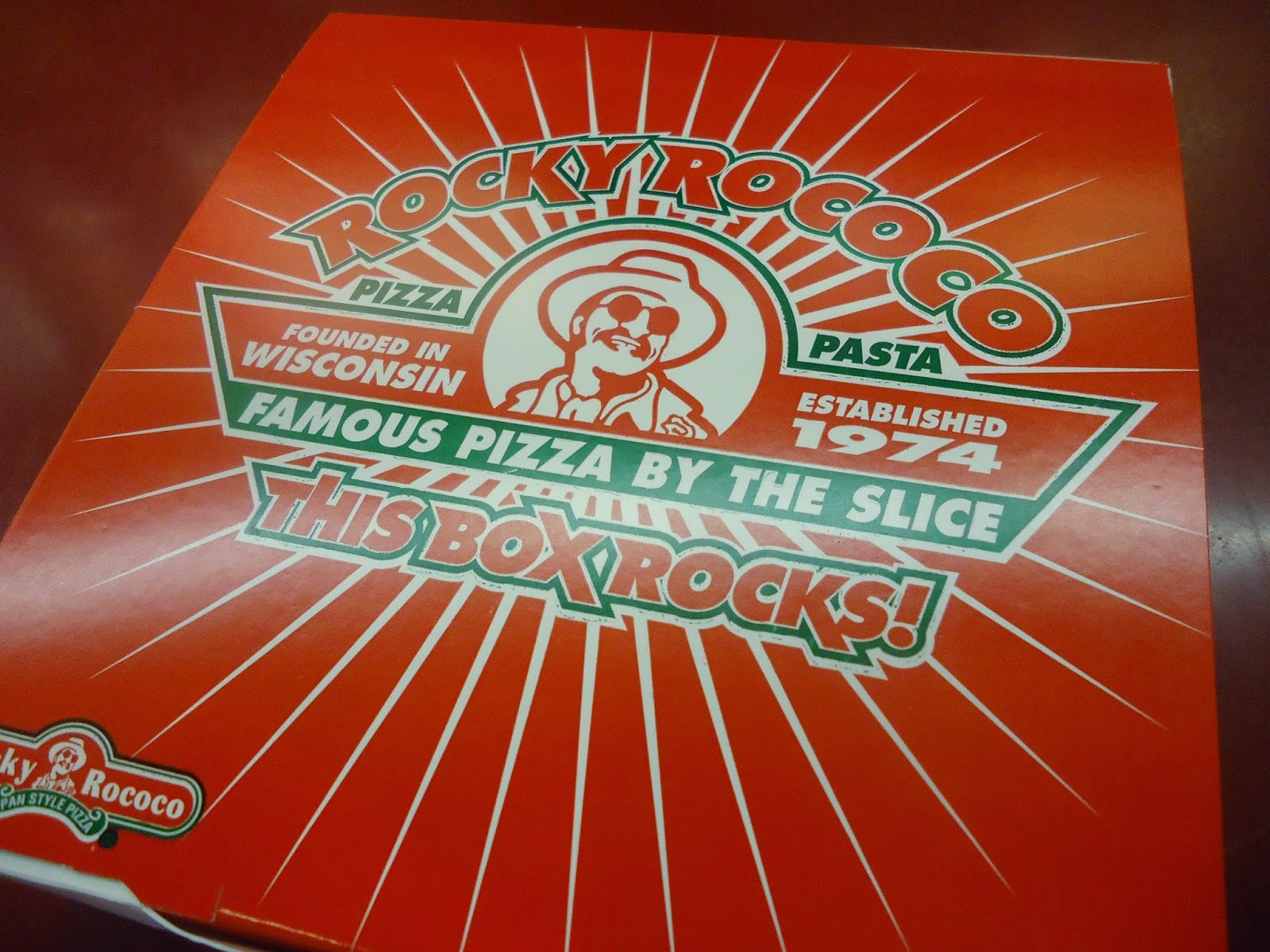 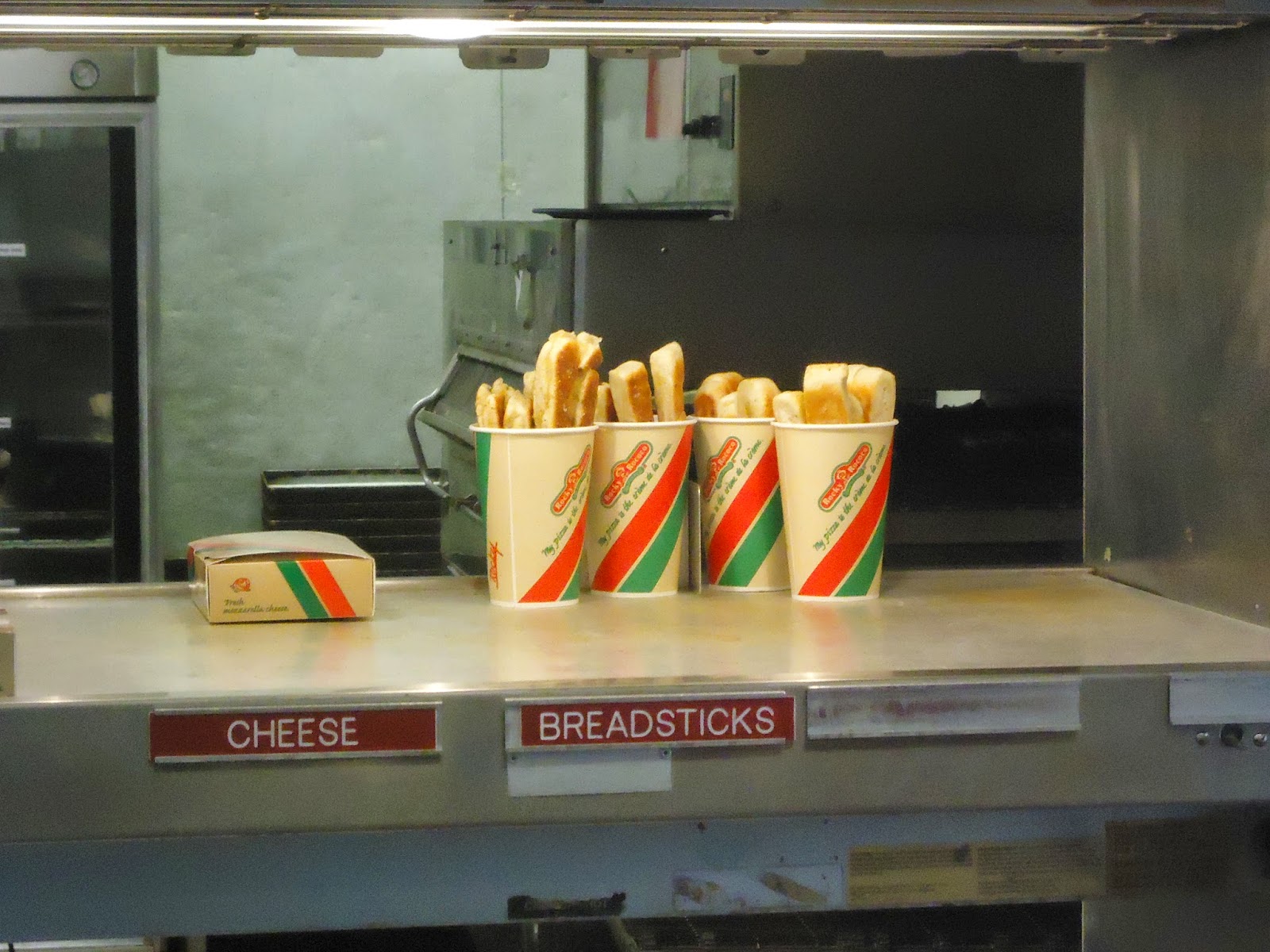