Class of '85: pass me the Cheez Balls 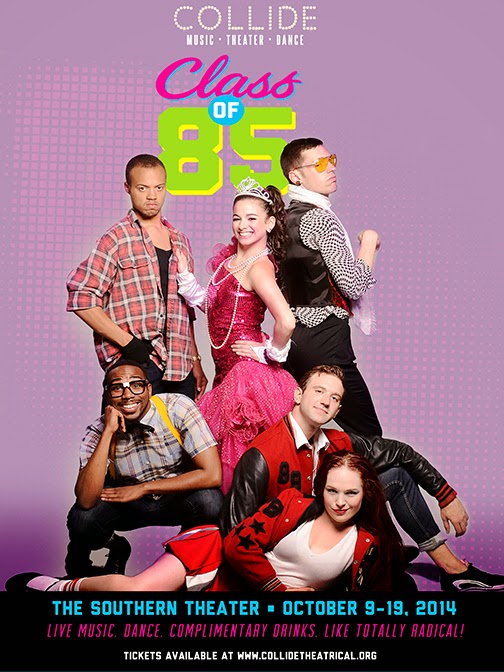 Collide Theatrical’s “Class of ‘85” is midway through its two week spot at the Southern Theater. We scooped up tickets because, as self-appointed Gen X media monitors, we have a duty to support all plays, movies, and TV shows about the 1980s. There was another draw for our visit to the historic theater on Minneapolis’s West Bank as a high school buddy of mine is the lead female vocalist. There is a surreal sort of comfort watching your high school friend from the 80s perform in a play about high school in the 80s thirty years after the original spectacle.

As “Class of ‘85” opens we are introduced to a mishmash of clichéd stereotypes: Princess, Cheerleader, Geek, Outcast, Jock, Rebel, Nerd, and Drama Queen. The angst filled teens jeté and pirouette between tales of unrequited love and misunderstood youth. Music meanders from wild-with-abandon hair rock to Whitney Houston pop slowed into sweet ballads, while classroom dramas lead to the eve of prom when the group of students is thrown together a la “The Breakfast Club.”

Dance performances are a jazz-fueled fusion of ballet and modern with some hip-hop and tap thrown in for good measure. Individual dancers flawlessly capture the aforementioned unrequited love, misunderstood youth, and general angst. High-energy ensemble routines tell the often manic-depressive stories that come with learning to navigate love and friendships, and a “Footloose” inspired finale provides the happy ending we all deserved.

While “Class of ’85” is billed as a dance production, music shares a starring role on the marquee. Deb Brown and Michael Hannah are backed by a band that packs in everything from synthesizers and organs to the poppy white hip-hop beat of New Kids on the Block.

We cheered the hokey plot, applauded the gloom, and sang along to remixes of “Tainted Love” and “Fame.” All of the misery and joy that we felt in adolescence came to life. I think John Hughes would approve.

Ticket bearers take note: beer and wine are complimentary. You can also reminisce with a can of saccharin and TaB for only $1. The only refreshments missing were a box of frozen Jell-O Pudding Pops and a canister of Cheez Balls.
Email Post
Labels: Gen X Minneapolis movies nerd culture nostalgia the 80s