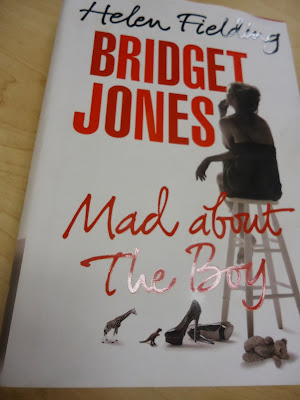 We watch Bridget Jones's Diary every New Year's Eve. It is one holiday ritual that is sacred to me. Revisiting Bridget reminds me that quirky failure can be lovable: a good life lesson that, for some reason, I need repeated. And repeated. The movie is based on Helen Fielding's first Bridget chronicle. I was horrified when an American girl was selected to play English Bridget, but as soon as Renée Zellweger appeared on screen performing her drunken solo to All By Myself she became Bridget Jones.

As soon as book three of Bridget's saga was released this year I, like other Bridget aficionados, prepared to spend some quality time with my old friend. I didn't realize how much I had missed her. Bridget and I have been through a lot together. (I know what you must be thinking... "That Patrice is such a well-read and cultured genius. She is a literary snob and must be very popular at social gatherings. I bet people seek her out for her thoughts on important topics like, oh, Chechnya.")

"Mad about the Boy" reads like Helen Fielding wrote the screenplay before the novel, relying on old jokes about silly Bridget. But after the first few awkward chapters I settled in and remembered all of the reasons I adored Bridget in the first place. Our favorite friends (including Daniel!) make frequent appearances. There are all of the predictable and comforting love entanglements we've come to expect in chick lit. Bridget's foibles are ever present and there are new escapades including, lord help us all, children.

Mummy Bridget? Bridget used to remind us of life before we worried about mortgage payments and post-birth bodies and nannies. Bridget used to be a few years younger than me: a quintessential British-version of a Gen Xer. In "Mad about the Boy" Bridget ages dramatically and transforms into a Baby Boomer. What? But even worse than the addition of children and being thrust prematurely into middle age is the death of Mark Darcy. And so the story begins.

It isn't that I cannot accept that Bridget had to move on for the story to continue, but I used to recognize myself in Bridget. We connected. Grown-up Bridget shows me how little we now have in common. She continues to stumble, like the rest of us, but her reactions to those stumbles have become self indulgent. She has career opportunities that she discards. She doesn't worry about money and flits about spending it on designer clothing. She is no longer lovable and goofy. Instead she is the friend you don't feel you can abandon even though you no longer have much in common. Something elemental is gone.

For the first time in a decade we didn't watch Bridget on New Year's Eve, and I am not sure when I'll be able to revisit her on screen. I got over the dreadful second installment (book AND movie) soon enough. I am in mourning for both Mark Darcy and the Bridget I used to know.
Email Post
Labels: books Gen X holidays movies pop culture