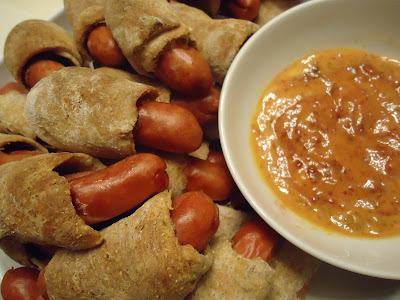 Prinskorv (prince sausage) are snappy little Swedish sausages in natural casings. They are common on the Julbord (Christmas table) and tasty alongside eggs and pancakes for breakfast. If you don't have a Scandinavian butcher (or IKEA Marketplace) in your neighborhood, substitute your favorite old-fashioned skin-on wieners.

When I was a kid my grandpa had to explain to me why Pigs in Blankets (in Minnesota that typically meant sausages wrapped in pancakes) were called pigs. I understood bacon came from pigs, and bacon was good, so pigs were good, but it hadn't occurred to me that sausages and bacon were siblings. And why weren't pancakes rolled around bacon on breakfast menus? Since then I've eaten a variety of Pigs in Blankets... well, actually I've eaten pretty much the same piggies encased in a wide variety of blankets: from puff pastry to fried wonton wrappers... a comforter of steamed dumplings, a duvet of french toast, and even a sad cold quilt of cabbage.

A bundle of pretty pink prinskorv and a batch of rye dough becomes a Swedish version of Pigs in Blankets. Don't expect a fluffy comforter. The rye dough is flavored with orange, fennel, and caraway and crisps in the oven. Serve with Lingonberry-Orange Mustard to enhance the spices.

Bake sausages in 400 degree oven until dough is golden and crisp.