"Let's grill!" Valerie told me.  I followed her outside the apartment into the shared student picnic area.  I carried the charcoal, she carried meat, matches, a few newspaper pages, and a weird chimney contraption.  She stuffed crumpled newspaper into the bottom of the chimney, filled the tower with coal, and lit a match. We watched the paper catch fire.

"That is never going to work," I interjected.

"You need lighter fluid," I directed, memories of my dad shooting gallons of the stuff over dimly lit coals.

Flames crawled up the sides of the chimney and within minutes the coal was blazing and sputtering flaming ashes.

"It worked!  I can't believe it!" I stood back, impressed.

"Told you," Valerie Valerie, pleased, dumped the hot coals into the grill pit.

About a year later, Valerie graduated from the U and moved her kids to Oregon.  We met one last time as she completed packing, and I eyed the chimney in her giveaway pile.

It's been almost fifteen years since I tied the charcoal starter to the back of my bike, indulged in some tearful goodbyes, and pedaled away from student housing. Since then I've used that chimney for countless meals, and always think of Valerie as we prepare our grilled dinners.  She's in Alaska now, preparing to move to Oregon or Washington State and attend grad school.

A few summer ago I tried to replace that starter.  I bought a fancy new one from my grocer.  But the interior was painted, and the paint melted off into the coals as we lit them.  So we returned the chimney and continued to use our standby.

Today, T often rewires the bottom rack back together, and uses many different solutions to patch the rust-worn holes along the smokestack.  I don't know how many years of use she has left in her.  But we'll keep using her to light the coals until she finally and completely succumbs to rust. 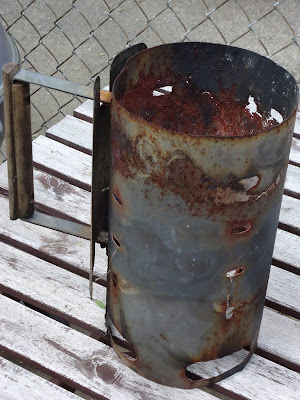 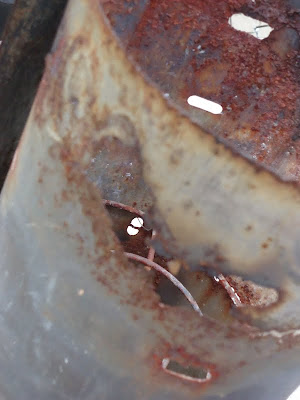 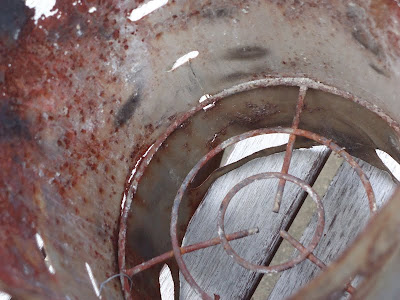