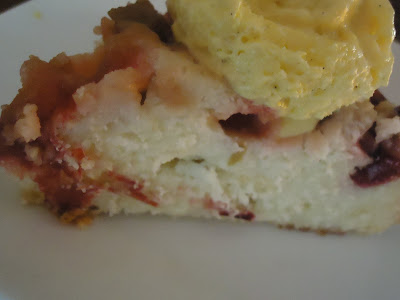 For an entire week I heard a constant patter of foodie types raving about a rhubarb recipe that appeared in the May 20 edition of the New York Times. "It forms its own moist pudding!" "It brings rhubarb to a new level!" "We ate the entire cake in one sitting!"

I have a friend who is known for her pineapple upside down cakes, and because of her prowess I rarely dabble in reverse fruit confectioneries. Encouraged by the success of other bakers, I decided to attempt the NYTimes darling.  According to the contents of my pantry, I made a few changes (noted below). Next time, I'll make another: double the brown sugar-butter syrup. Too much of the sticky stuff glopped off on the foil lining and was lost, making the rhubarb topping a bit drier than I would have liked.


1. Heat oven to 325 degrees. Line the bottom of a 9-inch springform pan with parchment paper. Butter the paper and sides of the pan. Wrap two layers of foil under the pan, and place it on a buttered baking sheet.

3. Mix the brown sugar and 1/2 stick butter in a pan over medium heat. Whisk until smooth and bubbling, about 2 minutes. Sift together the cake flour, baking powder and salt.

4. Whip 2 sticks butter in a mixer with a paddle attachment for 2 minutes. With your fingers, blend the remaining 1 cup sugar with citrus zest until the mixture is uniform in color. Cream together with the butter at medium-high speed until it is light and fluffy, about 4 minutes, stopping to scrape down the bowl halfway through. Add the vanilla and almond; mix well. Add eggs, one at a time, mixing well after each addition. Mix in the sour cream, then the vinegar. (It’s O.K. if the mixture looks curdled.) With the mixer set to low speed, add the flour mixture, 1/4 cup at a time, until well combined. Scrape down the mixer bowl in between the additions.

5. Pour the brown-sugar mixture into the cake pan, then spoon in the rhubarb and its juices. Spoon in the batter so it covers all of the rhubarb. Smooth out the top.

6. Bake for 1 hour and 15 minutes, or until the top of the cake is firm to touch and a toothpick stuck in the middle comes out without any large, moist crumbs.

7. Place the pan on a wire rack, and cool for 15 minutes. Run a knife around the cake, place a plate on top of the pan and turn it upside-down. Release the cake from the pan while still warm or else it will stick.
Email Post
Labels: dessert