We read the book so many times that I would close my eyes and rest, reciting the words from memory while the kids turned the pages.

My mom bought the book for one of the girls she nannied.  Four-year-old Desi slowly but steadily ambled along, while her older sister zoomed ahead and succeeded at everything she did.  Leo the Late Bloomer was my mom's way of showing Desi that she too would someday flourish.

It never occurred to me that Leo's journey would parallel my own. It was the 80s and I had plans.  Big Plans.  Success was within my reach, and whatever I wanted I could have. The problem was that I didn't know exactly what I wanted.  Distracted by shiny things, I reached for immediate gratification rather than planning, working hard, and accomplishing goals.

With each poor decision we make, fewer good options are available to us the next time we make a decision.  When we make wise choices, the good options that follow are limitless. It was a tough lesson, but those are the ones we learn best.

Saturday we headed to commencement; the ceremonial beginning for those of us who accomplished a goal and are now headed into the real world with a new shiny thing (for me, a master's degree).  For the first time, I allowed a shiny thing to guide me rather than distract me.

I feel kind of mushy when I think about Saturday. It was perfection, especially when I discovered that a fellow classmate from my Swedish language class was also at the ceremony, graduating with his B.A., and the faculty advisor from Solar House was one of the greeters on stage.  Eric  and Ann represented and reminded me of two opportunities I was given because of my grad program.  Swedish and ICON were unexpected and delightful blossoms.

"Then one day in his own good time Leo bloomed.  He could read!  He could write!  He could draw! He ate neatly!  He also spoke and it wasn't just a word, it was a whole sentence.  And that sentence was I MADE IT!"

I cannot brag that I've actually bloomed quite yet, but I am learning to eat neatly. 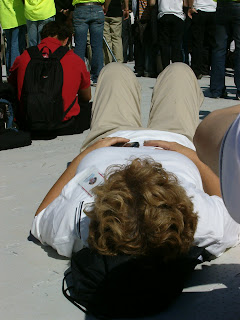 Ann naps on The National Mall
(from ICON Solar House) 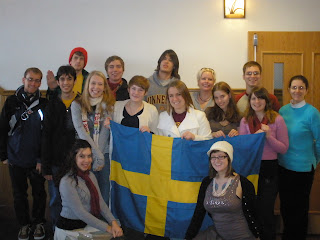 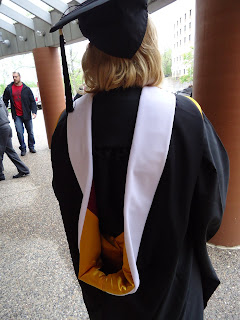 L said…
Congratulations my good friend. I wish you many blessing upon your graduation and I look forward to all that it brings your way.

frimp said…
You have accomplished something else...blogging twice in one day require a Masters! Congrats, favorite blogger...
May 18, 2011 at 3:20 PM