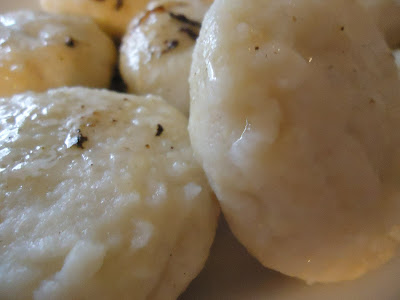 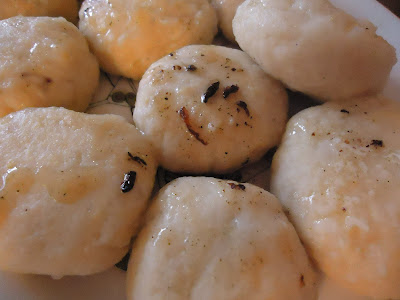 One of the students in my class last week asked if I'd ever made Swedish potato dumplings.  It was one of those pivotal moments when I heard angels singing (or perhaps mocking), as I keep coming across recipes for Kroppkakor, literally "body cake," (likely a reference to the size of each savory bundle). I don't believe in coincidences, and when the student asked about Kropp, a.k.a. klimp (smaller dumplings that may or may not contain potatoes) and klubb (Norwegian's version), I knew what I had to do.

There are two versions of Kroppkakor recipes.  The first calls for combining mashed potatoes with grated raw potatoes.  These, once cooked, typically turn a lovely, oh-so-appetizing shade of gray.  The second is a simple dough of riced potatoes, a bit of flour, and perhaps some egg to bind the dough.  Dumplings are filled with some sort of pork or suet.  Modern recipes allow for bacon and even pancetta. I turned to my favorite blog, Anne's Food,  for dumpling advice, and patterned my recipe after hers.

The difficult thing about testing recipes that you've never tasted before is not knowing what to expect, or what constitutes success.  T and I were baffled as we chewed the dense, doughy dumplings.  A warning: a little Kropp goes a long way.  Serve with lots of lingonberries, butter, and any leftover filling.

Peel and cut potatoes into smaller pieces; boil until soft.  Drain the potatoes and allow to cool; rice and refrigerate until quite cold.

Toss together bacon and onions in a large fry pan; cook very slowly on low.  Add butter and allow bacon to crisp and onion to caramelize (this takes about an hour).  Drain on paper towels, season with allspice or nutmeg, and pepper; set aside.

Stir together egg yolk, flour, and salt; add potatoes and mix together until a nice dough forms.  Separate dough into 12 equal ball (large enough to fill your palm). Make a hole with your thumbs and fill each dumpling with a good bit of filling; form ball around filling and flatten slightly.


Boil dumplings in large pot of salted water or chicken broth, a few at a time.  When dumpling rises to the top, it should be done.  Cook about 10 minutes each.

Eat immediately with melted butter, lingonberries, extra bacon-onion fillings, or a bechamel seasoned with allspice.  For leftovers, slice long and fry in butter. 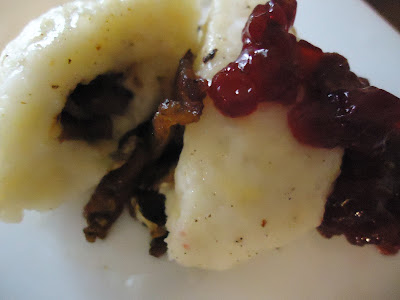