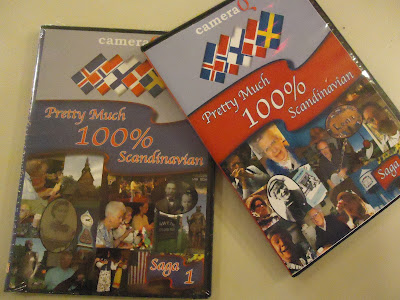 Last night ASI hosted a screening of Bill Beyer and Stefan Quinth's second of three sagas that document the stories and jokes of Scandinavian immigrants in (mostly) Minnesota (although North Dakota, Wisconsin, and Iowa are somewhat represented).  As the audience shuffled into ASI's auditorium patron after patron told me how much they needed to laugh as they muddle through this long winter and the rotten news of the world.  Featured prominently in Saga 2, Ole and Lena jokes coaxed much laughter from them, as who better to make a room full of Scandinavians chuckle and guffaw than Ole and Lena?

Not being an Ole and Lena enthusiast, I was relieved that interspersed among the bounty of Ole and Lena jokes in Pretty Much 100% Scandinavian Saga 2 is the essence of the Immigrant Story.

"Funny stories are usually true stories," documentary producer Stefan Quinth said.  He emphasized the importance of capturing the stories of immigration before the storytellers are gone.  "When they pass on, those stories disappear."

Indeed, as the faces of familiar but recently passed ASI regulars appeared on the screen, murmurs and sighs of affection rose among the audience members.  Seeing your beloved dead friends and relatives on film is a gift.

Still very much alive, my friend musician Leroy Larson is a regular at ASI's monthly smörgåsbords as well as special events. In Saga 2, he talks about growing up on the farm in Northern Minnesota.  While his family worked the hard land, his mother taught in a one room school house.  On winter nights when storms threatened, she pulled out a cot and slept in the school. Behind Leroy's humorous tales there is sometimes sadness. His memories remind me of something a lecturer once warned; we must not romanticize stories of immigration.  Immigration is never easy.  In fact, the children of immigrants and their children carry the difficulties with them as they are absorbed into a new culture.

It is said that a man's spirit speaks the language of his native tongue, which is why so many churches are the final place where immigrants can speak in the language of their births. Humor is as spiritual as religion, and Pretty Much 100% Scandinavian documents the language and spirit of immigration.