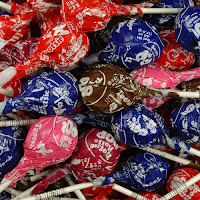 Photo credit: tastycandies.com
The first complaint letter I ever wrote was thanks to the guidance of my older sister.  I'd spent my pocket money to purchase my favorite candy, a Tootsie Pop.  For a few cents you received both a hard candy shell and a chewy chocolate inside.  Even as a four-year-old I understood a two-for-one bargain.
But on that inauspicious summer day something was amiss with my treat.
The flavor of the offending sucker: orange.  The reason for the offense: no chocolate interior (The Tootsie Roll interior of a Tootsie Pop is possibly the best part of the sweet, thus begetting most children's understanding of the "save the best for last" concept.).
I dictated while my sister carefully printed my grievances on stationary donated by our mother.  We found the address of Tootsie Roll Industries on the wrapper and included the wrapper along with the letter, and affixed the 6 cent postage to the envelop (my sister generously allowed me to lick the stamp, which in a kid's world was just about as tasty as a sucker.).  After the mailing I forgot about my outrage and the letter.  The ritual of official dissent was enough to sooth my wounds.
Several weeks later a large package arrived in the mail, addressed to me from the Tootsie Roll Company.  Inside of the box were a letter of apology for the errant sucker and four giant Tootsie Pops (of which my sister claimed partial ownership due to her assistance with my correspondence).  Several weeks following that gift another package arrived, this time a bag of Tootsie Rolls.  Several weeks following that parcel yet another arrived.  As I recall I received so many indulgences from Tootsie Roll that I didn't need to spend my money on candy for a year.
And I became a life long Tootsie Roll/Pop fan and loyal customer.
Several years ago I realized that I never sent the company a thank you for that childhood lesson.  This time I was able to write a note without the help of my sister.  This time the stamp cost something like 32 cents. This time I received a package in the mail with a letter from the company thanking me for my note as well as a 2-pound canister of Tootsie Rolls commemorating their 100th anniversary.
I remain a faithful and happy customer.
I read throughout the Internet that February 23 was Tootsie Roll's 115 birthday.  Happy Belated Birthday to my friend Tootsie Roll!  And thanks again.
Email Post
Labels: nostalgia pop culture snacks