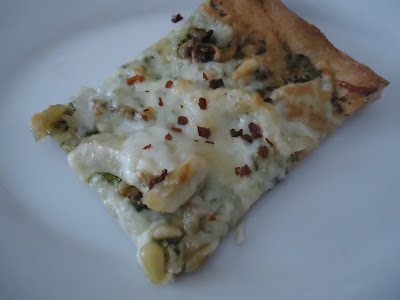 A friend mentioned recently the jar of fennel root and orange pesto that was living in her cupboard.  What a brilliant combination!  Why hadn't I thought of that myself?  Never one to rest on someone else's accomplishments, I decided to one-up that jarred wonder.  This flavorful pizza is my contribution this the party.

But there's more!  Caramelize that fennel and use it as a dip, a spread, a side vegetable, with eggs for breakfast... add some red bell pepper and onions, serve with fish or poultry and you've got a special meal.

Melt butter with olive oil over low heat in large pan; add fennel root and allow to slowly caramelize. When fennel is soft and golden, remove from heat and season with salt, pepper, and half of the orange zest.

Spread pesto over ricotta crust; add fennel root, pinenuts, and cheese. Return pizza to oven and bake until done, another 15 minutes or until cheeses melt.