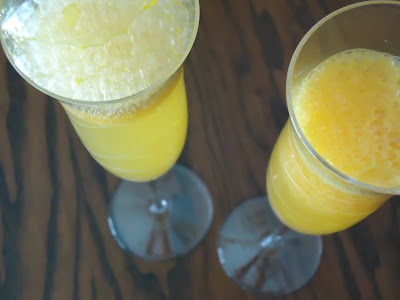 Spending New Year’s Day puttering between the kitchen and the couch is not a bad way to do it. I make the same meal every year, and each course feeds us incrementally while nurturing our spirits, taste buds, and hunger. Start with strong coffee and mimosas made of tangerine juice and Cava. A sweet pastry would be nice for the next course; perhaps I will add it next year. Then, latkes topped with cream (sour or fraiche) and caviar. Next, blini; I begin the batter before even the coffee is done brewing. Blini take about four hours of rise-time. Once they are cooked, I top them with more cream, gravlax, and caviar and eat them as fast as they come off the skillet. T prefers warm maple syrup and a bit of fruit. This day-long meal is my idea of heaven.

Too many New Year's resolutions remind me of giving something up for Lent.  Dramatic diets and gym memberships that last a few weeks are too much like Lenten sacrifices that make us sad or crabby.  The world is already filled with hunger and cruelty and pain.  And unless you enjoy the call of the gym and the burn of hunger, there is no strength gained in misery.  (Need to get healthy?  Cut out simple carbs and take a walk.  Join the gym because you love it, not to torture yourself into the New Year.)

Last year I resolved to eat more vegetables and learn about African cuisine.  I did fairly well on both accounts and neither resolve hurt.  This year no resolves for me, except to count my blessings rather than forbidding them.  I prefer cooking my way into the New Decade.

Melt butter and olive oil over medium heat in large skillet. Fry small round clumps of potato mixture (about 2 tablespoons per round) in butter/oil about 5 minutes each side or until golden brown. Place completed cakes on paper towels in warm oven until ready to serve.

Beat to stiff peaks 3 egg whites and fold them into batter; rest 15 minutes.

Cook individual cakes (a few tablespoons each) on hot greased griddle as you would pancakes. Cakes will raise quite high.