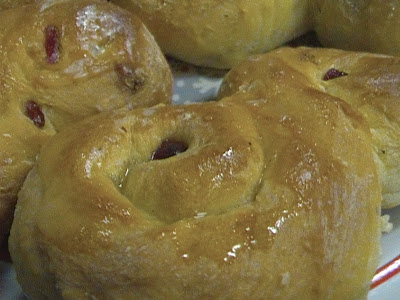 Glad Lucia Dag!  Today we celebrate St. Lucia Day with saffron buns.  Although Advent begins prior to St. Lucia Day, Lucia is a tangible kick off to the coming holiday season. At dawn on December 13, traditional Swedish families awake to the procession of St. Lucia complete with songs and children dressed as St. Lucia and her court. Lucia, the martyred Saint of Light, provides light during the dark season, and saffron buns are the traditional breakfast served with hot coffee and other baked goods.

Three versions of Lucia's legend exist. Lucia, a beautiful virgin, is often thought to hail from Sicily. In one legend, the engaged Lucia sells her dowry and gives the money to the poor as gratitude to God for allowing her mother to recover from an illness. Her heathen fiancé sends her to the Roman prefect and she is sentenced to a brothel. When the arresting officers come for her she cannot be moved. She is stripped and encircled by fire, but remained unmoved and unharmed. Finally, the soldiers execute her with a sword.

In a second legend, Lucia is a Christian virgin with beautiful eyes. To win the soul of a heathen prince, Lucia gouged out her eyes and the moved prince converted to Christianity, and God bequeathed Lucia with the reward of eyes even more beautiful than the first pair.

The third legend of Lucia has her nightly delivering food to prisoners within the Roman catacombs. Her hands full of the gifts, she lit her path with a crown of lights.

But how and why did Lucia become a Swedish icon? Is she a remnant of Catholic rule?  A Värmland folktale asserts that during a severe famine Lucia appeared and distributed pork, beer, and wine to the starving citizens.  Whatever her origins, Lucia became a welcome symbol of light and salvation during what was thought to be the longest and darkest night of the year, “when the ox bites three times in the crib."

December 13 was once referred to as the night of the trolls. As with so many folk traditions that are replaced with Christian substitutes, Lucia and the trolls are now symbolically morphed. Lucia’s association with the devil stems from that earlier belief, and many believed she was the leader of the trolls. Her name being the female equivalent of Lucifer did not help her reputation. It wasn’t until the 1800s that Lucia became the saint of light and goodness, and it wasn’t until 1927 that her holiday took off as a national celebration when Stockholms-Tidningen, a now defunct newspaper, began an effort to increase Christmas shopping. Their marketing campaign popularized Lucia with parades and processionals headed by a white clad Lucia. Today, every home, school, community, and hospital hosts a Lucia event, sometimes with competitions among young girls who compete to be selected as Saint Lucia. The late Swedish invention of St. Lucia celebrations is likely the reason that so few Minnesotans of Swedish descent incorporated Lucia into their holidays until recently.

St. Lucia saffron buns can be shaped in numerous forms. The most popular today are Lussekatter, Julkronor, and Julgaltar. Interestingly, Lussekatter are a reference to Lucia’s relationship with Lucifer and the cat-form witches were said to assume.

This year, I made these rolls using no dairy.  Almond milk replaced the whole milk in Marcus Samuelsson's recipe (as it appears in Aquavit and at Marcus's website here), tangerine zest was added to the dough, and craisins replace the raisins.  Rather than an egg wash, these buns were slathered with a powdered sugar and tangerine juice glaze.
Email Post
Labels: bread holidays Swedishness