Before Mullets and Neon 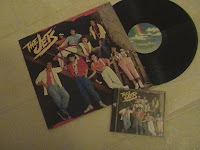 Yes, kids, that is vinyl (a.k.a. real music)
I was a high school junior when my friend Dana brought me to a nondescript suburban house to listen to some music. The house was filled with women from her church who were busy cleaning and cooking, as their Mormon congregation sponsored the new tenants who were immigrants from Tonga (via Utah).
We headed to the basement where we lined up along the cement walls, innocent groupies to the clean-cut boys who were deep in rehearsal. The teen brothers were already a relatively successful local band with a permanent gig playing at a popular hotel lounge. Their music was tourist-in-Polynesia meets pop-covers, and as young as they were they were all business and work ethic. I suspected that even their innocuous flirtations with Dana and I was part of the act, but we were more than happy to play along.

“They can play anything they hear, without using written music,” Dana whispered to me. One of the boys overheard her and told us that after his brother heard a song on the radio he was able to reproduce it by ear.

Half an hour into our private concert, two little girls were ushered into the basement. They were cute and giggly with shiny black curls and play clothes, but once they clutched the microphones in their tiny hands they too became polished performers with throaty vibratos that belied their tender ages.

It didn’t surprise me when a few years later the band had their first top 10 hit. More than 25 years after my basement introduction to them, The Jets are reuniting on Friday night here in Minneapolis. Cheapest tickets are going for $75 so I’ll have to live on my old memories rather than making new ones.
Email Post
Labels: nostalgia pop culture