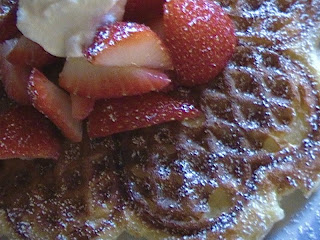 March 25 is Waffle Day in Sweden, celebrated nine months before the birth of Christ.  What does Mary's conception have in common with waffles?  Yet another holiday left over from Catholic rule, this day used to be called Vårfrudagen (our lady day), in honor of the Virgin Mary.  Dialect corruption begat the name Våfferdagen, then the modern Våffeldagen, meaning Waffle day. Now, Swedes eat waffles on Lady Day.
Additionally, migratory birds begin to return home, and the crane became associated with the day. There was a saying, "On Annunciation Day the crane carries light into bed," which meant that it was now light enough to no longer require a candle to light one's way to bed. Cranes apparently carried the light in their beaks. The crane also brought treats and gifts to children (such as dried fruits and oranges) from southern countries.

This recipe produces fluffy but substantial waffles that don't sink once they are out of the grill.  Serve them the traditionally Swedish way with strawberries or lingonberries and cream.  Glad Våffeldag!

Combine liquid and dry ingredients with a few quick strokes.

Beat until stiff but not dry 4 egg whites.  Fold into batter.