I have this friend who has a passion for licking the candy canes that hang on my mother's tree. She takes one dainty slurp after a meal, like an after dinner breath freshener, then goes about her business. Lexi has always been a bit quirky.

She came to convalesce with my parents after her original owner's pit bull injured Lexi's hip during rough play. After three months Lexi and my parents were inseparable. But Lexi’s breeder took her back home once she recovered.

When it became clear to the breeder than Lexi was heartbroken from missing my parents, the breeder agreed to allow her return. Eventually, the limp disappeared and Lexi hit the show circuit, finishing her championship in under a year. She then became a therapy dog, weekly visiting the home where my grandmother lives. The residents wait for her, ready with hugs and kisses, and eager to whisper their secrets into Lexi’s oversized ears. My mom often remarks how the residents know Lexi’s name but not hers. Last year several of them made Lexi Christmas cards. One woman has her son buy Lexi special organic treats. And my mom’s relationship with her mother has become close after years of distance between them. All because of Lexi.

When Lexi comes to visit my house she behaves like the lady she is.  She allows my persnickety cats to sniff at her and stare and growl.  Lexi ignores their bad behavior. She loves to push her emmense black nose into Haley's long Persian fur (she enhales with grateful sighs).  She sneaks their food and steals their mouse toys (nothing makes me laugh harder than the site of Lexi's giant mouth closed around a stuffed mouse with the mouse tail hanging from her lips).

Lexi experienced several false pregnancies, and attempted to nurse her favorite squirrel toy. After much deliberation a mate was found and last summer Lexi gave birth. The delivery was difficult, due to the first born – an enormous boy nicknamed Pudge. One emergency C-section and four beautiful pups later, and Lexi was finally a mother. Four lucky families welcomed the pups into their homes.

A few weeks ago Pudge died after surgical complications from neutering.

This week, Lexi is undergoing her own surgery. She developed symptoms that dehydrated her and now she is hospitalized; scheduled for surgery this morning to remove a tumor on her spleen.

Please say a little prayer for my friend Lexi, the candy cane lover. Christmas wouldn’t be the same without her. 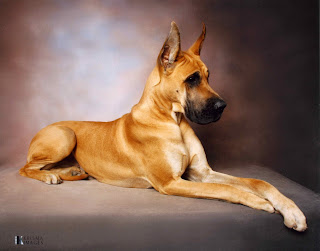 stef said…
Patti,
this is a really nice blog...even for an animal hater. What a beautiful job you did capturing her personality! I am saying a prayer for Lexi.
Stef
December 17, 2009 at 10:56 AM

patrice said…
haha you made it sound like i am the animal hater, not you. just shows how special lexi is that even you, not an animal love, will pray for her recovery.
December 17, 2009 at 11:18 AM