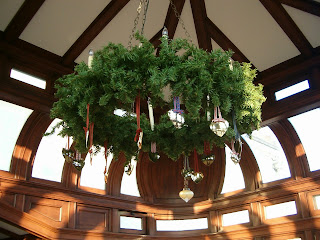 Advent Wreath at ASI
There are several signs that signal the beginning of the holiday season.  There are the festive decorations (including those on my Starbucks coffee cups and diet coke cans), and the local radio stations that play Christmas music 24/7.  There is the return of spokesperson Santa on TV commercials (am I the only one that still watches commercials?).  Peanut brittle and rosettes take starring roles at local bakeries.  And there is the beaujolais nouveau release on the third Thursday in November.  When I was young, that release was as much of a holiday as Thanksgiving, Christmas, and New Year.  Now, with the prices on that tart little baby wine higher than I typically spend on a good bottle, the release passes with little more than a blip on my radar reminding me that the season has indeed begun.
Email Post
Labels: holidays