There are experiences in DC that residents are probably accustomed to but that this visitor delighted in. The Metro alone provides endless entertainment. Like the whale shrieks and moans of the Metro escalators as riders endlessly descend (like Dante) and ascend. There are rows of public pay phones complete with operating headsets. There are hordes of teens in their school uniforms running in packs like migrating gazelles. There are the brilliant advertisements on the walls of the stations and trains alike. 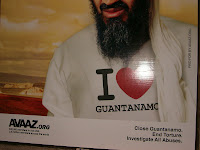 But my favorite things about DC are my friends that live there. While the rest of Team Minnesota stayed together in a hotel one Metro stop away from The Mall, I travelled each evening back to my generous and thoughtful friends, who spoiled me with extraordinary meals and conversations. We feasted on Asian and Indian takeout, and on the best crab cakes and shrimp cocktail ever made.  In the mornings there were pots of Dan's coffee (as good as my Swedish aunties make) and my favorite breakfast treats. And of course, at any time day or night there were friendly visits with Lionel (the cat who looks like "Charly Chaplin") and Marmalade (the world's softest smiling kitty). 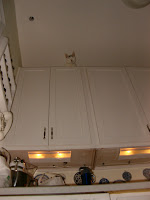 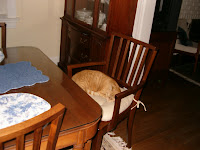 And after one particularly stressful day, I came back to my room to discover this... 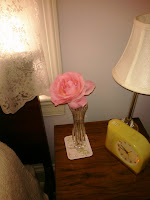 I wouldn't have survived so well an entire week away from Minnesota if it wasn't for Kelly, Dan, and the cats.  By the time Teddy picked me up on Tuesday afternoon the theme song from An Officer and a Gentleman played in my head as he strutted toward me (does Ted strut?  Homesickness probably emits an hallucinogenic characteristic).  To show how much I missed him I made him an apple cake yesterday.  I returned home a few hours later to discover he had eaten the entire cake.  Perhaps I was equally missed.
Apple Cake (inspired by Marcus Samuelsson's New American Table with my changes)
4 tablespoons butter, plus extra for greasing pan
3 apples (1 Honey Crisp, 2 McIntosh)
1 teaspoon cinnamon
1/2 cup white sugar
1/2 cup brown sugar
1 egg
1 1/4 cups flour
1 teaspoon baking powder
1/2 teaspoon salt
1/3 cup milk
1/3 cup yogurt
3 tablespoons bread crumbs

Preheat the oven to 350 degrees.

Peel and core apples, then slice Honey Crisp into 14 wedges.  Toss wedges with 1/3 cup mixed sugars and the cinnamon.  Roughly dice remaining apples.
In a bowl, beat together the remaining sugar and butter until it turns white. Stir in the egg. Mix together the flour, and baking powder, and salt.  Add to creamed butter, and then add the milk and yogurt.  Fold in diced apples.

Butter a 9-inch round springform or cake pan, and coat with bread crumbs. Pour in the batter.  Place apple wedges on the batter top, in the shape of a clock, placing the two remaining wedges in the middle. Sprinkle any remaining sugar from apple wedges over the cake.  Bake in the oven for about 40-50 minutes, or until a skewer inserted in the center of the cake comes out clean.
Email Post
Labels: dessert ICON solar house recipes